Brisbane,  the city big enough to get lost in and small enough to feel at home …* 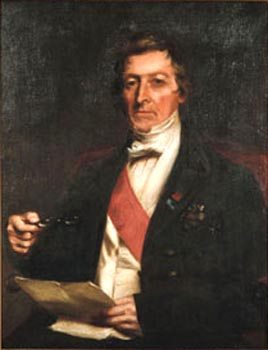 Major-General Sir Thomas Makdougall Brisbane, 1st Baronet, GCH, GCB, FRS, FRSE (1773-1860) was not content to rest on his fame as an astronomer and soldier. With the assistance of his friend, the Duke of Wellington, he sought the Governorship of New South Wales.

He and his wife Anna Maria arrived in Sydney on 7 November 1821 to replace Governor Lachlan Macquarie as the 6th New South Wales Governor from 1 December 1821. The official residence provided was Government House Sydney Cove, Port Jackson, but Governors of the period had the advantage of a second residence at Parramatta, 20 kilometres West of Sydney Town. 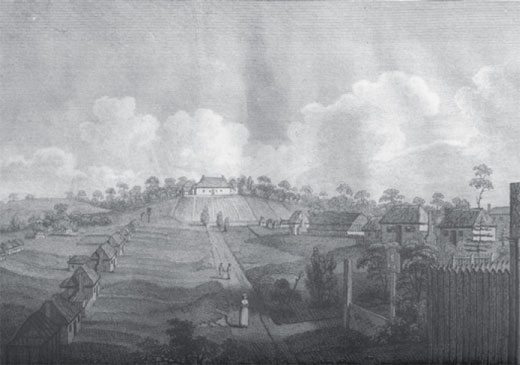 As the Macquarie’s were still occupying the Sydney residence, the Brisbane’s had no option but to reside at Parramatta.

Government House,  Parramatta became Brisbane’s preferred residence. Not only was he away from the annoyances of Sydney Town, but was located within a substantial parkland.

Here he  built, in 1822 the first astronomical observatory in Australia in order to study the Southern hemisphere constellations. He spent little time in Sydney and it was later said the Sydney residence was ‘largely uninhabited’ during his term of office.

One important event did take place at Government House, Sydney during Brisbane’s term. It was the first meeting of the appointed Legislative Council in 1824. The Council continued to meet in Macquarie’s bow-windowed ‘saloon’ but moved as the Council expanded ultimately settling in 1829 into part of the former “Rum Hospital” in Macquarie Street where the NSW Parliament continues to this day. 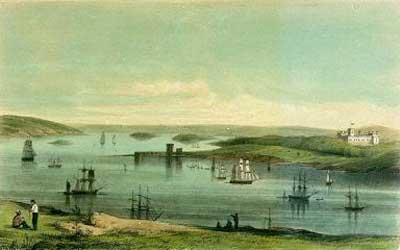 Government House, Sydney
In 1788 when the First Fleet arrived in Sydney Cove, one pressing need was to provide shelter.

Governor Arthur Phillip had brought a canvas prefabricated house, and like most of the first buildings, was temporary and makeshift. The building of a hospital soon became a  necessity as did a barracks for the Marines, a wharf and a storehouse.

Phillip found it increasing difficult to direct business from his temporary canvas house, so in May 1788 work began on a house for the governor. The site chosen for the Governor’s house was East on the Tank Stream at a place where the sandstone was partly exposed, just up from Sydney Cove. A rectangular area was excavated and a one storey, three roomed, brick house begun. As the house was being constructed, Phillip decided to enlarge the house to a two storey, six room building.

The house that arose lay firmly within the vernacular tradition of English Georgian architecture.  It was the start of the transplantation of English cultural traditions into the Antipodes. It was a neat brick rectangular house with a central doorway and symmetrically arranged windows; four on the ground level and five on the level above.

The appearance of the house is chiefly known from early sketches and paintings, particularly those done by William Bradley, George Raper, Thomas Watling and another unidentified artist. In 1798 Watling described the house as “composed of common and attick orders, with a pediment in front, and commands the most exalted station, but as neither the wood, brick, nor stone (lime there is none) are good for much, it is simple and without any other embellishment whatever”. Eighteenth century art depicting the house, despite Walting’s ‘no embellishment’ remark, show some simple stylistic pretensions. There was a dressed sandstone base, sandstone corner quoins, a strong definition of the central bay and front doorway emphasised by the pediment breaking the horizontal roof-line, by the roundel above the central window and by the fanlight and side-lights around the front door. The bricks for the house were made at Brickfield Hill, probably under the direction of convict James Bloodworth. Archaeological evidence indicates that the roof was initially clad with clay tiles also made in the Brickfield Hill kilns. These tiles soon became waterlogged, thus too heavy for the roof and were replaced by wooden shingles. Other buildings in Sydney during these first years were thatched using rushes cut near the harbour foreshores.

Governor Macquarie found that Government House, Sydney was far too small for its several functions. Together with his wife Elizabeth, he undertook an expansion and upgrading of the building. Late in 1810 work began on a large dining room or ‘saloon’ with a shallow five-windowed bow facing South, an additional office and bedroom to the East, and the replacement of Phillip’s skillion rooms at the rear of the building with new pantry and office. Further additions were made by Macquarie in 1818-19 but no further work was undertaken during Brisbane’s four years in the Colony. 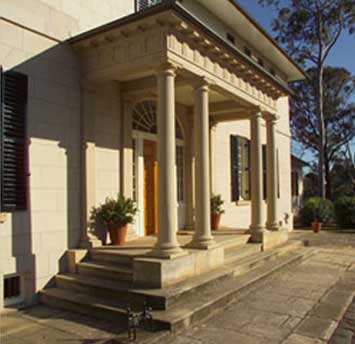 Government House, Parramatta
Early in 1788 it became obvious the land around Sydney Cove was unsuitable for growing crops and Governor Phillip commenced exploration westward along the banks of the harbour for fertile land. By late April 1788 suitable land was located and named Rosehill – later Parramatta. By November a farm was established,  resulting in the colony’s first successful harvest the following year.

In 1790 Governor Phillip decided to erect an official residence at Parramatta. This building has been rebuilt by successive Governors and extensively modified by Governor Macquarie. The building now known as “Old Government House ” has recently been restored and decorated in the Georgian style of the Macquarie period of occupation. It contains one of the finest collections of Australian furniture.

One of the reasons for Brisbane wanting the Governorship of New South Wales was his interest in astronomy. Soon after he arrived, he established at his own expense, an astronomical observatory in the grounds of Government House, Parramatta. With the help of two assistants, he conducted observations of the Southern hemisphere skies and was consequently responsible for significant discoveries. On his return to Britain he published the results of his studies – the “Brisbane Catalogue of 7385 Stars”. 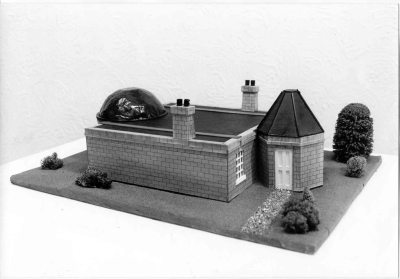 A model of Sir Thomas Brisbane’s Brisbane Glen Observatory of 1808, made by Gordon Ross circa 1988, courtesy Largs Historical Society

After Sir Thomas returned to England in 1825 the observatory became government property and was used by various astronomers until 1847. With no continuing official support the building gradually fell into disrepair and demolished in the 1860s. Today all that remains are two massive sandstone transit piers and nearby a commemorative obelisk erected in 1880. Brisbane’s residency at, and work from Parramatta, consequently moved the seat of government, for the four years of his term, to Parramatta. Brisbane and Sydney
While Sir Thomas was Governor, there were growing demands in Sydney to “send the worst convicts somewhere else”. Consequently Brisbane sent explorers north from Sydney to find a suitable location for a new penal settlement with a good anchorage, preferably on a river. In 1823 Lieutenant John Oxley set out in the cutter “Mermaid” to explore the Moreton Bay area, North of Sydney. As he rounded Point Skirmish into Morton Bay he saw a number of the Aborigines running excitedly along the beach toward him.

On closer examination the lead man was European and  turned out to be Thomas Pamphlett, a castaway who had been living with the Aborigines for seven months. Pamphlett told Oxley of a large river two day walk away, so guided Oxley to explore by boat this inland water way. They followed the river for about 80 kilometres, Oxley being delighted with good grazing area, fresh water, and the fine river which he named “Brisbane” after the Governor. Oxley returned in 1824 to set up the Moreton Bay penal settlement initially at Humpybong, near Redcliffe. The settlement moved in 1825 up the Brisbane River to where the city is located today, and named in honour of Sir Thomas Brisbane. Today in Brisbane, the Planetarium is also named in his honour for his astronomical achievements.

Although a competition was organised by Darling in 1827 for the design of a new Governor’s residence (his wife won third prize) no building was ever begun. Instead he, like Macquarie, just added to the old house, leaving the eventual building of a new, the current Government House, to await another Governor. The first Government House, Sydney was demolished in 1845 and on the site today is the Museum of Sydney. Although archaeological remains of the house are exhibited in this museum, it sadly only partially reflects on this former significant use of the site.

Councillor Phillip Black originally trained and worked as a geologist. He has lived in Surry Hills for the past 25 years, operating a tourism oriented business. Phillip is committed to independent politics and assisting people who live and work in the City of Sydney to voice their concerns and to achieve their aspirations for the future of our city through the Sustainable Sydney 2030 vision. Although the future progress and development of our city is foremost in his mind, he believes that our past should inform our present and future. He has long advocated the protection of Sydney’s built heritage and open space.

In 1993 Phillip helped establish the South Sydney Heritage Society, was a Governor of the Centennial Parklands Foundation, and a Trustee for the Centennial Park and Moore Park Trust. Phillip chairs the Sydney Town Hall Advisory Panel as well as the Sydney Town Hall Curatorial Committee. He was the Council’s chair for the Environment and Heritage Committee and sat on the Dictionary of Sydney board.

For the Lord Mayor, Phillip was representative on the ANZAC Memorial Trust and the Australia Day Regatta Advisory Council. Phillip is committed to being a voice for our gay, lesbian, bisexual and transgender communities and further strengthening Sydney’s international reputation as a city of freedom, peace, diversity and tolerance. Forming international partnerships with other cities was, for Phillip, the key to global understanding and the promotion of goodwill and harmony to globally meet the challenges of the 21st Century.

Now retired from Public Office Phillip continues his passion and work for preservation and conservation of Sydney’s Built Heritage environment.

Christine Douglas will produce The Marais Project’s hit CD ‘The Lady Sings the Viol’ as a Cabaret performance, The Independent, North Sydney on August 24 2013