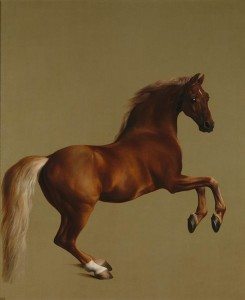 Painted in 1762 by horse specialist George Stubbs, Charles Watson-Wentworth the 2nd Marquess of Rockingham’s racehorse Whistlejacket has been described as ‘a paradigm of the flawless beauty of an Arabian thoroughbred’. Stubbs was dedicated to expanding knowledge of equine physiology. He studied at York producing his landmark publication The Anatomy of a Horse in 1766. His drawings secured commissions from aristocratic patrons, that included Whig politician Watson-Wentworth. He later served two terms as Britain’s Prime Minister. Whistlejacket’s grandsire was the famous Godolphin Arabian, one of three stallions that founded the bloodlines of the modern thoroughbred horse. A successful winner for his owner, including a four mile race at York, Whistlejacket was painted by Stubbs in the pose of the levade, a movement derived from manoeuvres first used in battle. They are performed today in classical dressage and it is an extremely strenuous position for the horse to hold.

Revealing how important art and imagination are during times when life is far from ideal, Goodbye Christopher Robin could easily have been named Saving AA Milne