American born James McNeill Whistler (1834 -1903) complimented on a painting of his mother, which he had just completed, is said to have remarked ‘…one does like to make one’s Mummy just as nice as possible’. Over the decades since it was completed in 1871, Whistler’s Mother has achieved ‘universal recognition and admiration’.

Now this icon in art history is the subject of a stylish exhibition starting on Good Friday, March 25, 2016 at NGV International, honouring the exchange of art works between the National Gallery of Victoria and Musée d’Orsay, Paris, thanks to the Australia- France Agreement on Cultural and Scientific Cooperation.

Tony Ellwood Director of the NGV and Dr Isobel Crombie exhibition curator and Assistant Director, NGV, commented ‘It is all about… uncovering the life and career of James McNeill Whistler; the life of the sitter, Anna Whistler; the artwork’s volatile reception; its conservation story; the influences that informed its production; and… unexplored Australian connections’. Whistler’s Mother, otherwise known as ‘Arrangement in Grey and Black No 1’ is a portrait by an artist son of a deeply shy, quiet and openly religious woman, his mother, whose profile of piety has since it was first displayed, had artistic, social and historical implications.

Paraded and parodied for generations, when Whistler’s portrait of his mother finally appeared on a postage stamp in 1934 ‘In Memory and In Honor of the Mothers of America’ her presence ensured her influence on its evolutionary cultural path.

Presented today as an icon of America, Whistler’s Mother stands for family values because successive generations understood that she urged respect for parenting by standing up for what she believed in, even if her son in the main seemed to outwardly ignore much of what she said.

The ‘Australian connections’ are an important aspect of this exhibition, with Whistler’s influence traced in both International and Australian art as it developed.

This is achieved visually via the rich and diverse holdings of the NGV, from which all the other works in this exhibition, consisting of oils on canvas, etchings and decorative arts have been drawn. It is an impressive display. The NGV associations with the portrait of the artist’s mother is revealed in an edition of the etching Black Lion Wharf, 1859, which is depicted on the wall in the background of the famous painting. They also hold a Goodwin Chair in their collection, similar to the one Anna Whistler sat on while her portrait was recorded.

The pose with her seated projecting a very serene side-view was regarded as innovative, although we know it was born out of practicality because of her age.

Intriguingly it is also a technique employed in Egyptian art, which was enormously popular during Whistler’s day with new discoveries being made daily.

The side view pose became a symbol representing the ‘solemnity’ of any occasion, it’s one that makes us pause.

As a Septuagenarian and based on my experiences, it is hard not to wonder what Anna Whistler would think of opening an exhibition featuring her son’s portrait of his much admired mother on Good Friday, the most solemn day in the Christian calendar.

She was a fierce Protestant and working on such a holy day would not have been approved of in her time and until recently in ours.

But there it is.

In moving with the times today one would have to say the presence of Whistler’s Mother’s austere portrait in Melbourne would make a good starting point to begin any Good Friday meditation on what life is really all about.

James McNeill Whistler lived much of his life in England, Russia and France. As an adult he saw himself as a true Bohemian – entirely free of regard for conventional rules and practices. When he was a young man Whistler exchanged his middle name ‘Abbott’ for his mother’s ‘maiden name’ McNeill, as a mark of his fondness for her and respect for her devotion to her beliefs.

Fiercely religious, a thinking woman who abhorred ostentation and extravagance, Whistler’s mother certainly influenced her son’s love of austerity in art as he embraced his own louche lifestyle, while admiring her life of modest means.

Society regarded him as a wit and a flamboyant dandy, one always working against his own reputation through bad behaviour when out and about in society.

Looking back from our time in retrospect it is very easy to think that during Whistler’s age everything was about owning a fabulous collection of wonderful objects, outstanding artifacts or a beautiful house in the country.

And indeed it was all of that, but it was also much more. James McNeill Whistler Rotherhithe 1860; (1871) or (1879) printed, plate 5 from Sixteen etchings of scenes on the Thames, courtesy of the National Gallery of Victoria, Melbourne, Purchased 1892

Society was led by a group of very influential people who believed ‘correct aesthetics’ were outward signs of how their society worked socially within.

Born in Massachusetts Whistler spent a large part of his youth in St Petersburg where his father an engineer was advising on the construction of a railroad to Moscow, he learned to speak French the universal language of diplomacy at the time.

He also encountered a lavish lifestyle and started drawing classes at the Imperial Academy of Sciences, which kick started his life in art.

Returning home with his father he studied drawing while in the United States Military Academy at West Point, but was dismissed in 1854.

He worked in the drawings division of the United States Coast and Geodetic Survey, receiving his first training in etching, one of the most important techniques used by the old masters. He became a key figure in an etching revival known as ‘artistic printing, which did not appeal to purists.

James McNeill Whistler decided to pursue a career in art by going to Paris to study in 1855, and never looked back or returned to his native America.

He arrived in Paris ahead of his peers in the arts world who would not come until a decade later.

Whistler loved every aspect of Parisian Bohemian life, which he found far more inspiring than being locked up in the classroom.

So he set himself high standards, which seemed most often unattainable to many of his friends and became renowned for scrubbing his canvases clean and starting again if he was not satisfied with his work. Whistler’s Mother was part of a world in America addressing societies many concerns following the bitter and bloody conflict the Civil War 1861-1865, which would be a huge task.

Normally at such a time many are called upon to sacrifice for the greater good, not to just keep whooping it up as everyone else wrestles with ideas of conscience, culture, class and race as indeed they do in every age when war is so defining.

The Civil War left a very large grievous wound, which at best was only cauterized, although it did not destroyed an American belief in progress. After it was over Americans began flocking overseas to Rome, to Paris, to Florence, London and Berlin. Dr Isobel Crombie with a superb Japanese screen, part of the Whistler’s Mother exhibition at the NGV International 2016 The Aesthetic movement in Europe and England began in the 1860’s.

Its admiration for Japanese art and design became visible as regular trade and a dialogue discourse between Japan and the rest of the western world was re-established, helped by the efforts of American Commodore Matthew Perry.

This is the period when the Pre-Raphaelite Brotherhood was formed and talented painters such as Edward Burne-Jones (1833-1898) and Dante Gabriel Rossetti (1828-1882) defined what beauty was, at least poetically on a canvas.

They may not have been aesthetes themselves, but they were at the movement’s heart and soul.

In 1863 Whistler moved to live at 7 Lindsey Row, Chelsea nearby to the Tudor House where Rossetti lived and they began a great friendship.

John Everett Millais (1829-96) praised Whistler’s painting ‘At the Piano‘ as ‘the finest piece of colour that has been on the walls of the Royal Academy for years’.*

By the 1870’s when Whistler was recording his mother’s image, the single minded idea of purpose that had inspired its first American painters changed dramatically.

European ideas and aesthetics began to influence their very real choices in both life and art. 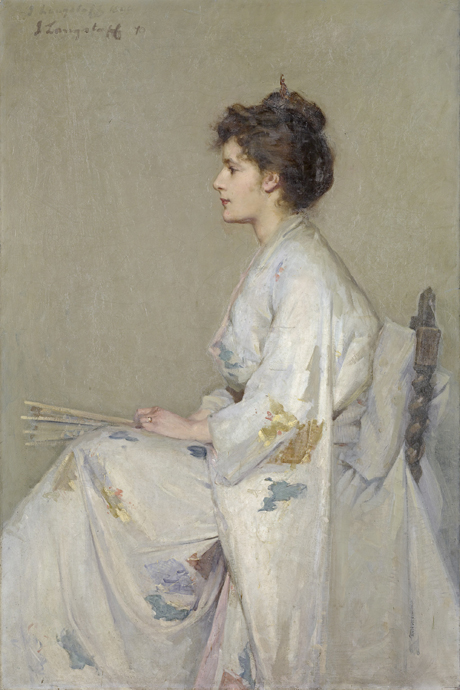 Now in the Freer Gallery of Art at the Smithsonian Institute in America, Whistler’s Peacock Room murals painted for English Shipping magnate Frederick R Leyland in 1876, reveal the vivid palette he embraced, quite separately from his arrangements in grey and black.

Over the mantel his La Princesse du pays de la porcelaine, 1863-64, reveals his passionate interest in Japonisme, which would also have a great impact on Australian artists arriving in London.

‘Art for Art’s sake’ was Whistler’s credo, and he became renowned for his cutting edge comments, especially when in conversation in London with fellow wit Oscar Wilde,

They were also both well known in the café society at Paris.

Whistler referred to himself as a ‘butterfly’, using its image as his own signature as he merged fact with fiction and hid what motivated him most behind a sometimes-aggressive façade.

We know a great deal about Whistler from his complete correspondence, which has been transcribed, translated, annotated, and is available Online by the University of Glasgow

Men and their mothers, just as daughters and fathers often have complex relationships.

While Anna Whistler may have not admired aspects of her son’s lifestyle, she undoubtedly loved him and was proud of his work. She is also known to have enjoyed the company of some of his friends.

In giving herself as a subject for her son to record an image of who she was and what her life was all about as it turned out Whistler’s Mother was a gift to him that the world at large would also benefit from viewing.

The exhibition is accompanied by an illustrated, 88-page hardcover publication, available at the NGV design store for $24.95.

A range of public programs are being presented including a ‘Redefining Whistler’ floor talk series with contemporary insights about the artist and artwork, and a Mother’s Day High Tea featuring exquisite creations by Darren Purchese of the renowned sweet studio Burch & Purchese, inspired by Anna Whistler’s own recipes.