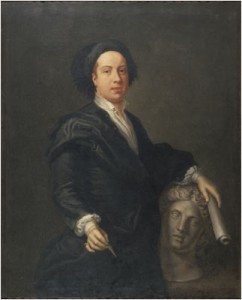 There wasn’t really anything eighteenth century English creative genius William Kent (1685-1748) couldn’t turn his hand to. In the words of one of society’s most famous and influential commentators of his time bon vivant, letter writer and Member of Parliament Horace Walpole, William Kent ‘leaped the fence, and saw that all nature was a garden’.

He would change the course of garden history in England with his innovative creative ideas.

Alexander Pope was an influential poet contributing to the debate and climate of opinion that had an effect on societies mores and concerns, as well as the art of garden design during the eighteenth century in England.

It was 1713 when he wrote about ‘the taste of the ancients in their gardens’ ….and that ‘the amiable simplicity of unadorned nature… spreads over the mind a more noble sort of tranquility’. Architect, interior designer, furniture designer, sometime painter and gardener William Kent refined his own design style and preferences during a series of Grand Tours of Europe early in the eighteenth century, including one with the man who became his patron – Richard Boyle, 3rd Earl of Burlington.

In the 1720s Kent worked for Lord Burlington creating a charming pleasure pavilion Chiswick House for the Earl and his friends. Its design was inspired by the villas of sixteenth century Venetian architect Andrea Palladio in the Veneto, Italy that both Burlington and Kent had seen. …’he let in the north wind upon his house and parterre, which were before adorned and defended by beautiful woods’ Alexander Pope wrote when he published an Epistle to the Right Honourable Richard Earl of Burlington, Occasioned by his Publishing Palladio’s Designs of the Bathes, Arches, and Theatre’s of Ancient Rome in 1731 which included…

…to build, to plant, whatever you intend,
To rear the column, or the arch to bend,
To swell the terrace, or to sink the grot;
In all, let Nature never be forgot…

They were all in pursuit of the perfect house. Author Edward Hyams, The English Garden 1964, put forward the theory that William Kent’s conception of a garden was very close to the natural state of the landscape.

This also corresponded to the philosophy of Lord Shaftesbury whose opinion was expressed in his essay The Moralists published in 1709.

He declared that things had to be approached in genuine order to find out what was pure and permanent in nature.

The ideal of pure nature is somewhat illusory because it does not really exist at all today except in the oceans and deserts, the Himalayas, or that part of the Amazon basin not penetrated yet by mankind. And even that is fast diminishing. The giant forests of Europe and England, where the quest for nature in its pure state has long been pursued, are today the products of human intervention on a monumental scale.
The quest for the realities of nature in England had its fullest expression during the eighteenth century with the search of the intellectuals for Arcadia, a rustic secluded and peaceful paradise.

Arcady, as it became affectionately known in England, was an idyllic place where the progress of humanity had been balanced by the restrictions nature imposed upon it. Gentlemen of means relished an intellectual pursuit of the ‘antique’ in their desire to pay homage to the democratic heritage of ancient Greece and Rome by transposing references to it in a visual arts display in the great outdoors.

Pursuing nature as art resulted in the reconstruction of an ancient temple on the fringe of a wood to offer the visitor a similar impression as may have been felt by an ancient Greek when confronted by such a temple before entering a sacred grove. Small Palladian Style Rotunda in the Garden at Chiswick House

William Kent commented himself that ‘all gardening is landscape painting‘ and introduced the idea of tracks and paths winding through great outdoor spaces.

Circuit walks around a purpose made lake, often with an island in the centre, meandered through many different reflection areas with special types of plantings to observe. Now and then the traveler on the path would come upon an unexpected bridge, a surprising vista or a well planned scene, one that often included a temple paying homage to a mythological god, or a goddess from the legends of antiquity. 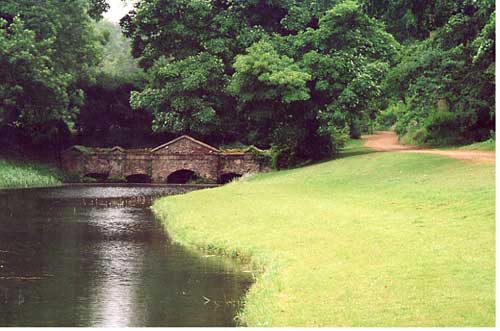 In the process they all became elements in the grander picture eventually known as English landscape design, which offered a deeply spiritual and peaceful experience for all those who were able to traverse its paths and byways.

Access to many of these idyllic scenes at the time were the provenance of privilege and today, generally for a price, we can all tread in their footsteps.  However there are always exceptions.

As the century progressed and other patrons and their gardeners joined this pleasurable pursuit formal paths led from the house out to the fringes of the property where you could join into well planned meandering walks into the countryside where one could enjoy the vista of other people’s estates you may happen upon while taking your daily exercise.

They all contributed to transforming the English countryside for all time into a picture postcard experience of nature, one that has ever since found favour all over the world. 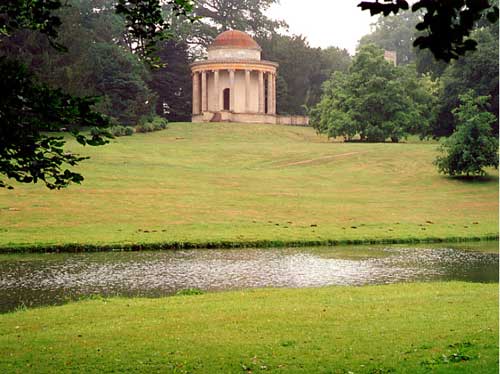 Temple of Antique Virtue at Stowe

William Kent remodeled the garden at Stowe c1734 for Sir Richard Temple, who wanted him to re-create the Elysian Fields that final resting place of the souls of the heroic and virtuous, all of whom had been singled out by the ancient gods for eternal happiness.

In the garden at Stowe Kent placed an Egyptian pyramid, an Italian Belvedere, a Saxon temple, a Chinese house, a temple of Concord as well as a Corinthian arch, with temples of Venus, Victory (put in after the 7 year war) and Friendship.

The repertoire also included a shepherd’s hut, a cemetery and, on an island, the tomb of much admired dramatist William Congreve. He deliberately left the temple of Modern Virtue as a ruin to counterbalance the temple to Antique Virtue,  which was complete in every aspect. There was a hidden meaning in this deliberate conceit.

We could observe that perhaps Kent was ‘hedging his bets’ while putting into practice the family motto Templa Quan Dilecta . (How beautiful are thy temples). He built a curved screen with sixteen niches each containing the busts of eight men of thought and eight men of action all of whom were worthy heroes.

At Stowe there was a talented young gardener Lancelot Brown, who came to work with Kent as the Head Gardener.

Brown would become renowned for seeing ‘capabilities’ for completing a garden in the natural style and would carry Kent’s vision into the future by enlarging it. They would all transcribe nature so successfully many who came after believed they were viewing nature in its raw state i.e. complete with little spinneys, large woods, lovely lakes and walking trails.

William Kent was acknowledged in his own time for his contribution to the evolution of landscape design.

While today we may reflect on the folly of costs expended to achieve their objective and the loss of natural habitat we could also consider that by successfully influencing those at the top echelons of society to admire nature as art, they unconsciously started the movement to value and conserve it.

Eighteenth century commentator Horace Walpole said of William Kent that he “was a painter, an architect, and the father of modern gardening. In the first character he was below mediocrity; in the second, he was a restorer of the science; in the last, an original, and the inventor of an art that realizes painting and improves nature. Mahomet imagined an Elysium, Kent created many.”

Following Kent and his contemporaries nature became a priority and a preserve of Kings, Queens, Lords, Ladies, Dictators, Elected Leaders, Presidents and Politicians. They gradually grasped the importance of setting aside great natural landscapes for posterity and also laid out botanical gardens where the study of nature and our planet’s plants could be pursued for the greater good. Today the world’s national parks are visited by thousands and thousands of people each year necessitating all sorts of human amenities and infrastructure at great cost monetarily and naturally. If Kent and his patron were time travelers they would be overwhelmed to see  their desire to view nature as art has led.

At the time his clients needs were his priority and at the very essence of their passionate quest for experiencing nature, albeit in their own backyard.

Who then shall grace, or who improve the soil?
Who plants like Bathurst, or who builds like Boyle.
‘Tis use alone that sanctifies expense,
And splendour borrows all her rays from sense.