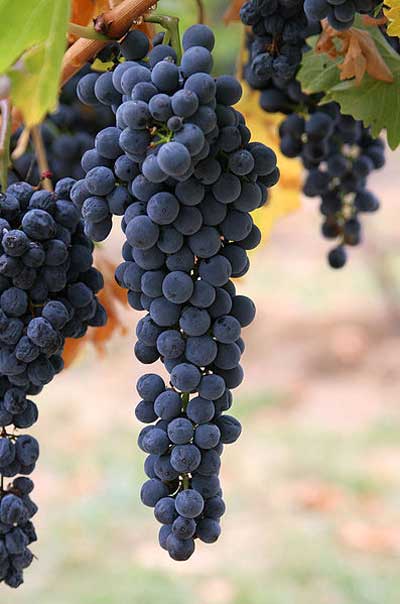 Wine was made before history was recorded and for thousands of years has evoked high spirits, given comfort and pleasure, as well as made fools of many different people in many different countries and cultures.

In The Pantropheon (History of Food and its Preparation in Ancient Times), by the renowned flamboyant French Chef Alexis Benoit Soyer (1810 – 1858) used Jean Anthelme Brillat Savarin’s (1755-1826) quote, Tell me what thou eatest and I will tell thee who thou art’.

Soyer’s Pantropheon was a cornucopia of food data dealing with the preparation of food for the table in classical antiquity. It was a witty and erudite study of antiquity’s larder, first published in 1853.

Soyer calls upon the ancient Greeks, the Romans, the Assyrians, the Egyptians and the Jewish peoples to reveal themselves and their traditional ways of eating and drinking.

Richard Hoe in America made this book available to an even wider public than ever before because of the invention in 1843 of the rotary printing press. This allowed millions of copies of a page to be printed in a single day.

Alexis Benoit Soyer (1810 – 1858) was considered, in his time a gastronomic genius and he was the rage of stylish, mid nineteenth century England, devoting his vast energies and resources to serve both rich and poor. He assisted architect Charles Barry in 1846 to design the original kitchens at London’s Reform Club in Pall Mall when it was founded and became its most celebrated chef for twelve years. 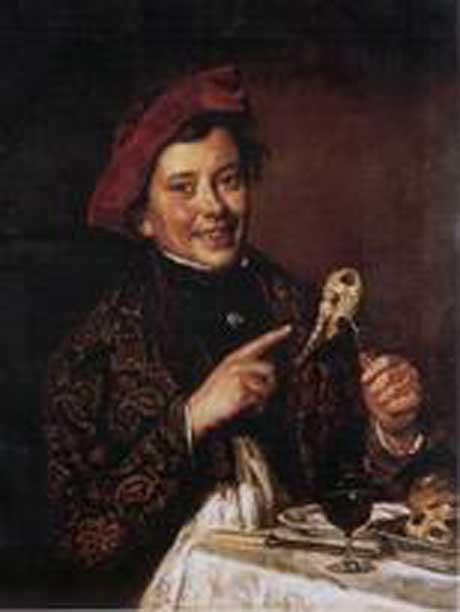 Alexis Soyer, author of The Pantropheon

He also designed and organized ‘soup kitchens’ during the Irish famine of the late 1840’s, providing soldiers for the first time with nourishing food during the horrors of the Crimean War in 1855.

In collaboration with nursing luminary Florence Nightingale Soyer gave of his talents and money to aid social profit causes all of his life.

He described wine as that ‘grateful drink’, one that ‘draws the ties of friendship closer’ and one that all ‘honest people, all generous souls’ are eager to taste.

He recorded that Livia; the consort of 1st century Roman Emperor Augustus said when she was 82 years of age that she was indebted to Bacchus, the God of Wine for her long existence.

The Epic of Gilgamesh is one of the oldest poems in the world and it is prose it mentions wine for the first time.

…Amethyst it bore as its fruit,
Grape vine was trellised, good to behold,
Lapis Lazuli it bore as grape clusters,
Fruit it bore, magnificent to look upon.

The epic dates from eighteen centuries before the Christ event and archaeologists during the last century or so have proved a great deal of relevance to ancient sites and cultural practices in its prose. Epic of Gilgamesh fragment of a tablet bearing the prose

Rediscovered 1845 – 1851 by British archaeologist Austen Henry Layard 1817 –1894, the epic poem survived because it was recorded on ceramic material.

Victorian gentleman, diplomat, politician, art connoisseur and man of letters, Lanyard was not what we would call a professional archaeologist today. He and his Turkish colleague Hormuzd Rassam [1826-1910] discovered thousands of fragments of broken clay tablets.

They were excavating on the east bank of the Tigris River in modern day Iraq at the site of the ancient city of Nineveh, which was an important city in Persia in ancient times and the capital city of the Assyrian Empire.

Nineveh occupied a central position on the great highway between the Mediterranean and the Indian Ocean, where east met the west. Fragments were shipped to England where pioneering English Assyriologist George Smith sorted classified and re-joined them.

Smith also discovered the narrative that filled twelve tablets was a poem, recording the collective wisdom of Gilgamesh, the historical King of Uruk [2750 -2500 BCE] who reputedly ‘saw everything, learned everything and understood everything’. 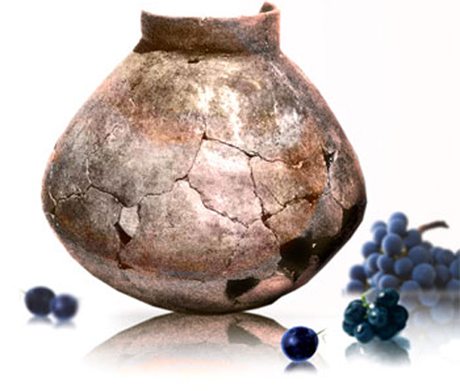 The text refers to a woman named Siduri as the ‘maker of the wine’ and Enkidu, a wild man of the woods. He is given his first experience of civilisation by a temple woman, who it says shows ‘him human manners and gives him wine to drink’.

He ‘drank seven times, his thoughts wandered and he became hilarious his heart full of joy as his face shone’… a condition many people still have had after drinking wine today.

Grapes were kept overlong in ceramic storage bowls and in the right conditions of temperature its reasonable to assume they would have fermented.

The first style of wine could have also evolved from raisins, grapes dried in the sun and stored. 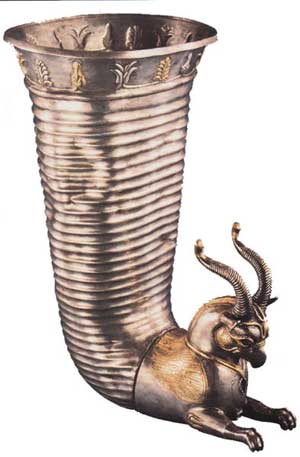 Silver Rhyton, or Drinking Horn found at Persepolis, near to Shiraz, Ancient Persia

If this were so they would have produced a very tasty wine, something in the manner of Tokay.

The King would have enjoyed drinking it from the Kantharos, a deep drinking cup with a vase like bowl usually mounted on a slender stem with twin handles that curved up above the rim of the bowl.

Originating with the Etruscans in Italy during the seventh and sixth centuries before Christ, drinking cups of this kind were exported all over the Mediterranean and the shape adopted by the Greeks (British Museum).

The other style of drinking vessel in ancient times was a Rhyton or drinking horn, such as this example of fine craftsmanship. In copper, silver and gold this example dates from the Achaemenid period of the Persian Empire 500 –330 BCE.

Originally carved in the form of a bull’s horn, wine poured in at the top came out through a narrow stream between the griffin’s legs and poured into a wine cup or directly into the mouth.

The first book of the Bible, Genesis relates how Noah was a man of the soil. He was the first to plant a vineyard, drink the wine and become drunk.

The grape vine was one of the first plants domesticated, although its nature required certain conditions of geography and climate for it to grow and produce its fabulous fruit.

There is a biblical injunction that says ‘a little wine maketh glad the heart’. Modern research has revealed that wine, sensibly taken, may be beneficial to our health and wellbeing.

I don’t know about you but that’s the one I would prefer to believe when imbibing the juice of the grape.

We would not have wine without the Vitis Vinifera, the famous vine of Europe and the Middle East.

It emerged in the area around the Black Sea during the Quaternary, the period that runs from about a million years ago and includes the Upper Palaeolithic period, which ended about 8000 BCE.

The Vitis Vinifera’s stock provided the basis for most historical wine.

Wine making developed, alongside a variety of food processing techniques, made possible when nomadic groups of peoples began permanent settlements.

In Hajji Firuz in Iran, one Neolithic house dating from 5400-5000 B.C has yielded six wine jars with a residue of wine still in them.

Nearly all-primitive tribes developed some sort of intoxicant to help them face the harsher realities of life.

Poppy juice, fungi and dried flowers of cactus are among such sources.

However, none can compare in economic or social importance than alcohol, considered the most pleasant of all the benign poisons we consume.

On December 5 2012 the international art world witnessed an historic moment in Sotheby’s auction house at London when the fabulous Renaissance art work – Raphael’s Head of a Young Apostle (c. 1519-20) from the Devonshire Collection at Chatsworth sold for £29.7 million. This is the record price for any…