The archaeological remains of Egypt’s ancient capital at Thebes in the Valley of Nobles, bears testimony to the wonders and glories of the sophistication of the Egyptian civilisation, without the aid of technology.

Wall paintings date from 1500 years before Christ today relate many and varied stories about grapes and vines, including men being carried out of a drinking party.

One image graphically depicts a women being ill after consuming far too much wine.

In yet another vines are trained on horizontal trellises or pergolas that were set into formalised gardens, which were also planted with other fruits including figs and pomegranates.

The treading of the grapes in ancient Egypt took place in large tanks supported by an elaborate structure of poles with ropes or straps for the men to hold onto while they sought purchase with their feet.

A light roof sheltered them from the heat of the sun while they worked.

The grape vine served a triple purpose; it gave shade, provided food and drink and, was highly decorative.

Howard Carter found King Tutankhamun’s tomb in 1922 in the Valley of the Kings. Like many other ‘royal’ tombs there was food provided for the King’s afterlife.

However Tutankhamun’s also included grapes, some kept for eating while the rest had been made into wine. 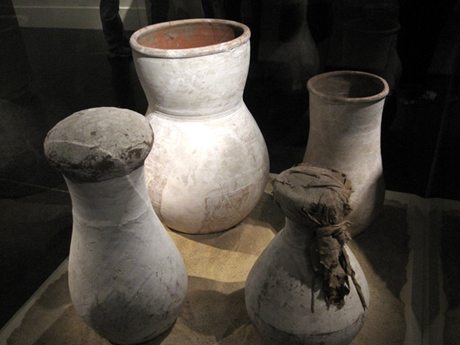 Wine jars were filled and stoppered with mud on a pad, or a wad of palm wood fibres.

They were sealed, the contents labelled, some of which have remained intact for archaeologists to interpret.

They were found with the royal seals of Tutankhamun still in place.

Because of the excellent preservation of the objects in Tutankhamun’s tomb we know that his ‘wine list’ contained a choice of some thirty varieties; the jars still labelled with wine, year, vineyard and vintner.

Drink, why wait for the lamps the day
Has not another inch to fall
Fetch the biggest beakers – they
Hang on pegs along the wall

The wine of the grape became a medium through which alcohol could be enjoyed in an air of conviviality and companionship. In primitive, and later Christian tribes, wine also became an instrument of religious experience, a practice that continues unabated to the present day but more on that later.

The rise of civilisations around the Aegean and Mediterranean areas of Europe gave special meaning to the drinking of wine.

The introduction of viticulture to ancient Greece is both prehistoric and a subject for conjecture.

Six centuries before Christ vineyards were spread all over Attica, where the pattern of life was, to some extent shaped by its proximity to the capital city of Athens.

By the seventh century before Christ vineyards were also all over Arcadia, the region of Greece in the Peloponnesus, which takes its name from the mythological character Arcas.

English gentleman would later see it, during the eighteenth century in particular, as an idyll, one where life could be lived to a point of perfection.

On On Run, dance, delirious, possessed!
Dionysus comes to his own;
Bring from the Phrygian hills to the broad streets god, child of a god,
Spirit of revel and rapture, Dionysus

Dionysus was the ancient Greek god of wild and fertile nature, of the vine and wine. Bacchus the Roman God of Wine

Since ancient times a great many festivals grew up around his cult.

As a child he was fed the wine, he was reputed to have invented from a cornucopia, or horn of plenty.

Dionysus is said to have had many adventures, including introducing viniculture to India.

Mostly because of the popularity of wine based worship, Dionysus grew in stature to become one of the ruling Greek Olympian Gods seated at the right hand of his father Zeus, the father of Gods and Men.

The bleating lambs, the ivy leaf, the vat,
Full-bosomed matrons hurrying to the farm,
The tipsy maid, the drained and emptied flask,
And many other blessing

Dionysus was the personification of man’s earthly passions, the God of plant life whose vitality was renewed each spring.

He was linked to fertilisation, the life cycle and the mysterious and the potent forces underlying both life and death and that meant he also became a symbol for immortality.

Raised in a cave on Mount Nysa, as a baby Dionysus was said to have been tutored by Silenus a rural god whose statue of the two of them both is attributed to one of the most famous sculptors of his day, Lysippus.

The Greek wine drinking party, or Symposium had an etiquette that had, over time been perfected to a fine art form.

Music was provided by flute-girls, garlands of flowers were worn and there were competitions for songs and riddles.

It was a night when men of culture, philosophers and scholars held elevated discussions and enjoyed the charms of male friendship.

All those who attended shared the cost of getting together, talking and drinking.

The ideal Symposium was also a framework for a debate on love, especially ‘Platonic love’.

This term refers to an argument for the supremacy of non-sexual, love between people of like minds what we would call today, ‘soul mates’.

However it is a fact the very same ‘flute girls’ who played the music, were also called upon to exercise their talents in other ways for men of power and influence.

Of the gay danseuse of ripened charms
I’ve told you; hear me, pray,
Of the budding flute-girl who saps the strength of the sailor man for pay’ 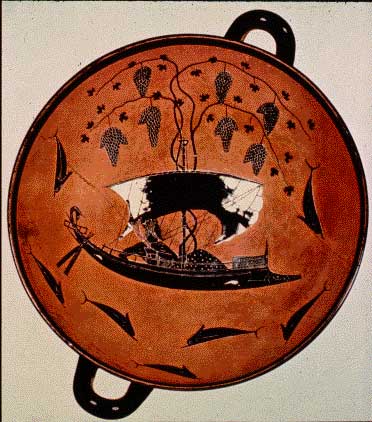 Dionysus painting on the interior of a Kylix

The most usual style of wine drinking cup was a Kylix, a shallow two-handled bowl on a short stem whose beauty of shape was enhanced by the wonderful art of the vase painters.

One of the great masterpieces of black figure painting is by Exekias is a famous Kylix, which depicts Dionysus on a ship with Pirates, who had tried to abduct him.

They were all transformed into dolphins and he made vine leaves spring from the mast to act as sails.

Wine was mixed with water, one part to three, in a crater, the large vessel at the back and it was used by the Greeks for that purpose; dilution with water was not only necessary but a much needed economy to make wine last from one harvest to another.

Gluttony, sottishness and stupefaction were considered ‘madness’ to an educated Greek as they dulled and distorted an active, appreciating mind and luxury was an extravagance worthy of ridicule, rather than admiration.

Some of the most exquisite craftsmanship of the Hellenistic age went into elaborate gold work now associated with luxury. This detail is from a gilded Krater found at Derveni in Thessalonica. It depicts Dionysus seated under a sinuously trailing vine.

Ancient Greeks loved the delights of life and the pleasure considered the greatest and the expense the least.  This does not mean they would get carried away.

A man’s intellectual and moral make up demanded a very high personal standard of attitude, stance and behaviour, or we could say his words, deeds and actions needed to be in harmony with each other.

It was expensive, but snow was used in hot weather to cool wine, or for economy, lowering it down a well chilled the wine served in the kylix, which changed shape over the centuries.

This Kylix is of a type known as an ‘eye cup’. It  has a shallow bowl, plain lip and a short splayed foot. Appearing on both sides the eyes become part of a face when the cup is tipped to drink; the handles mimic ears, and the foot, a nose.

Scholars believe the eyes may be merely a decorative element or may be an attempt to ward off evil and bad fortune.

Nobody would take mulled claret;
Everybody chose, you know,
Wine that had been ‘welled’ or mingled not with water but with snow If I’m no fool, Dad’s put us down the well, like wine to cool

August is National Family History Month at National Library of Australia, where you can discover details of your Australian story, First Fleet to 21st century