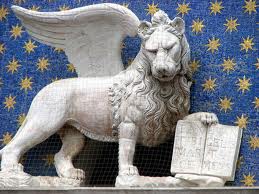 Wherever you walk in Venice you will find images of lions, who are part of the legend of its founding. Some eight hundred years before when he was on his way to Rome, Mark the Evangelist, it had been believed, had been told in a vision by an angel that one day his body would be laid to rest on an island in the Venetian lagoon. Two merchants, who sailed home from Egypt in the ninth century, stole the body of St. Mark from Alexandria and supposedly concealed his body in a basket under salted pork to mask the smell. It was received by the city authorities and reburied with great solemnity, bringing great prestige to the city. The local religious and civic authorities quickly elected St. Mark as Venice’s patron saint, and the apostle’s traditional symbol–a winged lion–became the logo of the Venetian Republic. Wherever Venice ruled the Lion traveled and today they can be found as far away as the island of Crete. 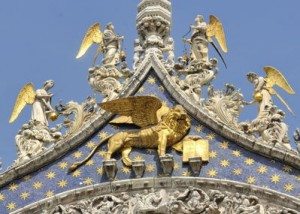 I found it thrilling to stand inches from The Greats: Masterpieces from the National Galleries of Scotland bringing to life a story from mythology, or from life