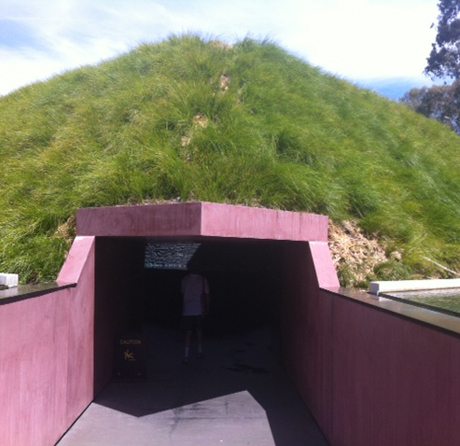 James Turrell’s Within Without 2010 is a Skyspace, a lighting installation built in the grounds of the National Gallery Australia in Canberra.

It was constructed outside the Gallery’s main entrance and is NGA’s most visited work. It can be accessed at any time of the day or night. I was very motivated to view this monumental structure especially after seeing James Turrell’s Retrospective exhibition

From the outside a grassy mound was surrounded by water and the structure was open to the sky.

The distinctive Australian landscape of gum trees was a feature James Turrell had respected and complemented in his design. The architectural outer simplicity was in harmony with its natural surrounds.

Tree’s shadows glistened in the waters and as I moved forward a sense of eager anticipation and an aura of calm began to settle on me. 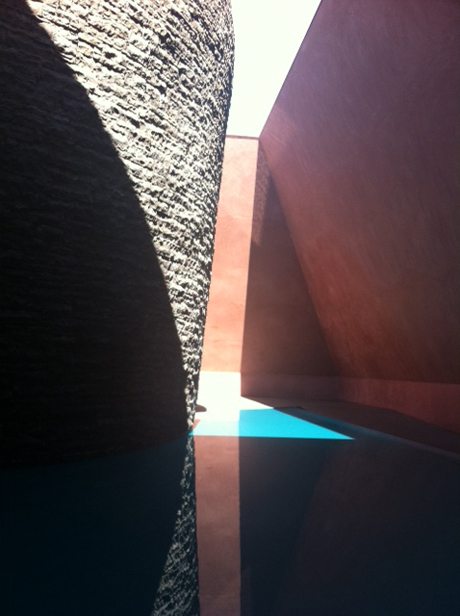 After walking on one of the two ramps I crossed a small bridge and entered the Skyspace.

Inside the pyramid room the outer walls were washed in soft red ochre and this colour connected me with the earth.

Rising from the shimmering turquoise water was the dark grey stupa.

A stupa is a dome shaped building and in the past was erected as a Buddhist shrine and a place of meditation.

Although a modern structure it appeared ancient and sacred.

The outer walls of this chamber were constructed from Victorian basalt.

To my eye bricks of varying hues changed with the light and the uneven patterns suggested age.

Walking around the dome structure I saw the effects of light and shadow on the water.

The solidarity of the dome made it timeless. Indeed I felt in a sense that time stood still, and the precious experience was serenely comforting.

The gentle moving water, rippling and gurgling and the revered atmosphere induced a reflective state that took me within. I was reminded of Robert Hughes’s succinct comment. “Turrell’s art is not in front of your eyes. It is behind them”.

The walkway around the dome took me to a single doorway that led to the inner chamber.

Now I had entered the Skyspace proper and my eyes were drawn to the magic of the sky.

The circular opening onto the sky narrowed my focus onto the ever changing patterns of the sky filtering light and movement.

Within without is a work of towering strength and a sense of sacredness and contemplation was woven into the chemistry of the design and the sensitivity of its execution. I immersed myself in viewing the sky without a horizon. James Turrell Within Without 2010, courtesy National Gallery of Australia, Canberra

“The Unbearable Lightness of Being” a novel and then a film title from the 1980’s aptly described my state absorbed in this wondrous work of art, sculpture, architecture, archaeology, engineering, geology, astronomy and spirituality. James Turrell, Within Without 2010, Photo: Karleen Minney, The Age

Other people in the viewing chamber whispered in awe of this majestic and austere mystical space.

The power of the creation also lay in its innate ability to slow the viewer down and give respite to us from the rigours of modern living.

This inner circular sanctum had a bench where you could sit and tilt your head and eyes, study the sky with all its subtle changes, ponder the mysteries of nature and artistic endeavour and deliberately consider your own existence.

The simplicity of this celestial vault I am sure is testament to James Turrell’s passion for important cultural sites across the globe. 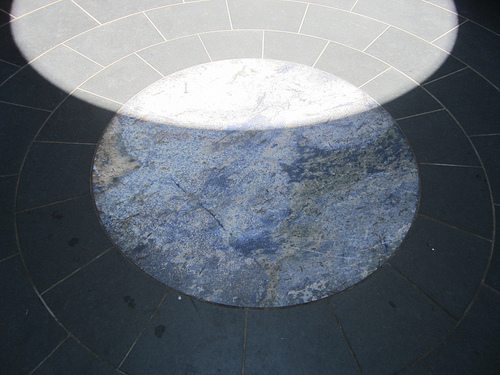 Viewers can witness the movement of the sun, moon and stars through this light portal. 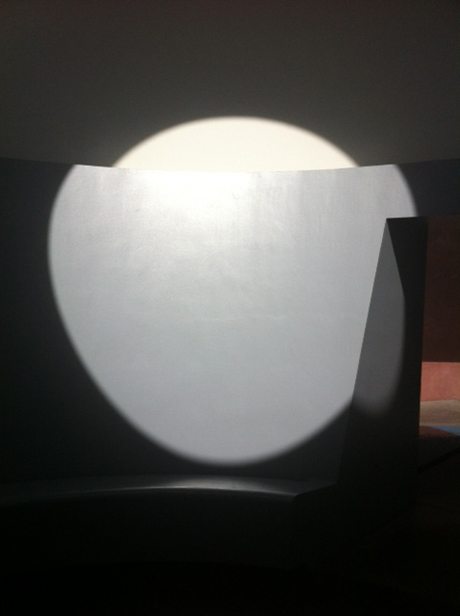 The naked eye can observe the ever varying sky, its colours, and the effects of light and cloud formations during the day.

Then compare and contrast these sightings with the spectacles of the night sky.

There is a strong recommendation from the gallery about the wonders of viewing Within without at dawn and dusk because the transition periods are more intense.

When I glanced at my watch it was 3:15pm, a circular shadow of white light was etched across the wall of the dome reflecting the afternoon light.

The patterns created across the outer walkway and surrounding water looked abstract in composition.

Shadows and blocks of colour were clearly defined and my eyes felt the full force of a visual delight.

“In a lucid dream, you have a sharper sense of colour and lucidity than with your eyes open.

I’m interested in the point where imaginative seeing and outside seeing meet, where it becomes difficult to differentiate between seeing from the inside and seeing from the outside” explains James Turrell.

Again the purity of light and space was illuminated by this transforming structure and I was awakened to a different way of seeing and being in an artwork. 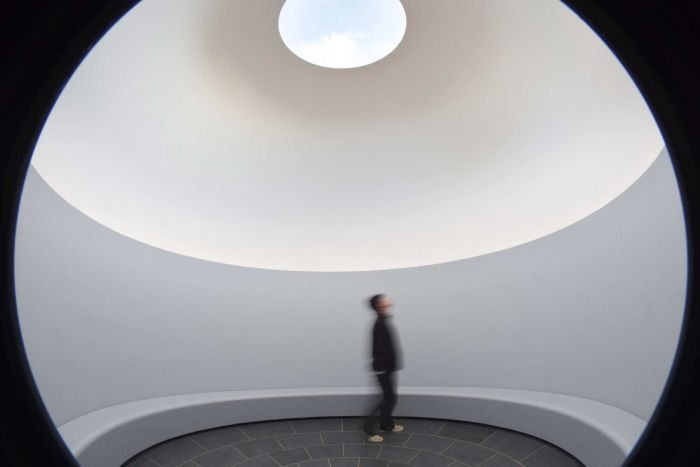 The light within the chamber was at play with the celestial outer world and the effects were effervescent and sublimely revealed. James Turrell has constructed a number of Skyspaces since the 1980’s that are scattered across the world.

However Roden Crater is the best known example of his work and when it is completed will comprise twenty three spaces some with multiple viewing capacities.

In Australia we are fortunate to have a unique artwork created by one of the leading contemporary artists in the world.

Within without is an iconic artwork that will inspire generations and cement a cultural legacy unique to James Turrell.