Political intrigues past and present may look fashionably different, but as far as humankind goes, nothing much has really changed with human nature in hundreds of years. It is all about manipulation in the halls of power when taking on huge responsibilities. Some people are up for the job, others not. It’s about the survival of the fittest and those that can be made can also be ‘unmade’.

England’s historical anti-hero and enigma the Earl of Essex Thomas Cromwell (b.1485 – 1540), was a man born to get things done. He lost his illusions about life at a young age, suffering both physical and mental abuse at the behest of his blacksmith father.

By the time we meet him in the completely riveting BBC acclaimed costume drama television series Wolf Hall, Thomas Cromwell as an adult of middle age has become a master of silences and secrets.

Surrounded by dangerous people with blatant agendas, he wants to weave his way in life while endeavouring to be a good man, although it is easier said than done.

Rather than use his injuries as an excuse, he views his own suffering as a positive, taking deliberately calculated risks so that he can measure and dispassionately weigh them against his actions.

Fear for him is not an option just another hurdle to overcome because no one can hurt him any more than his father has. An excellent manager, those close to Cromwell including his protégés are all loyal to him. We know why when we encounter the award winning performance of the distinguished Tony award winning English stage actor, theatre director and playwright Mark Rylance (b.1960-).

Directed by Peter Kosminsky, Rylance is truly extraordinary as Thomas Cromwell. He is the perfect combination of virtuosity and eccentricity – a brilliant master of silences, much is said without a word being spoken.

His stillness born from experience comes from deep down in his soul and ensures that he triumphs in this role.

He can move mountains with just one look; the right man in the right place at this time for this outstanding performance and I couldn’t wait for one episode to met morph into the next.

Waiting for the second series will be hard. I completely agree with renowned actor Sean Penn’s admiring assessment of Mark Rylance, “… he is … the closest thing to a magician we have in the field’”. One of the men who ‘made England’ and beloved by the ‘common people’, Thomas Cromwell it was said could “draft a contract, train a falcon, draw a map, stop a street fight, furnish a house and fix a jury” all in the course of just one day, well at least according to Booker Prize winning novelist Hilary Mantel in her two novels the television series is adapted from.

Wolf Hall and Bring up the Bodies have been adapted by writers Hilary Mantel and Peter Straughan to make the series which relates how, by escaping to Europe during his teens, Thomas Cromwell spent some years in the Low Countries expanding his worldly experiences.

Knowledge is scanty, however he is thought to have gone to France where he fought with the French, although little is really known until he surfaces at the battle of Garigliano near Naples on the side of the French.

Seeing the battle turning he flees the battlefield and travels to Italy.

In Florence the Frescobaldi family generously take him in and hr becomes a loyal servant, keen to learn and eventually he is left at Venice to become an agent for a local merchant. He travels on from there to Antwerp, where he starts to practice Law. Speaking fluently in French, Italian and with a good knowledge of Latin Cromwell establishes himself as a leader in the legal and mercantile world. He is still in many ways invisible although he has a wish that will see this son of a blacksmith rise way above his ‘station’ in life during a period of history when that was more than hard to do.

Returning to England c1515 he marries the widow Elizabeth Wyks whom he loves and they have three children together, Gregory, Grace and Alice, although he sadly loses all of his girls suddenly to the sweating sickness in 1528. 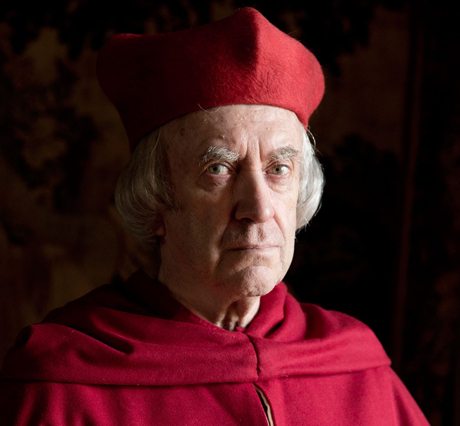 Taking time and with the great patience that he has acquired Cromwell during the 1520’s has gradually worked his way into the employ of one of the most powerful men in the current circle of the Tudor killing fields of Henry VIII (1491-1547), the eminent Cardinal Thomas Wolsey (1473-1530).

Cromwell develops a deep affection for his Wolsey, one he keeps close to his chest. Having gained a reputation as both a fixer and a listener, Cromwell is a man completely unimpressed with grandeur and has no problem abolishing holy institutions that seem to him to be corrupt.

He is renowned for going about his work with ruthless efficiency; perhaps he wanted to reinvent his age of entitlement and lead it towards a future full of enlightenment.

Thomas Wolsey Lord Chancellor and Cardinal loved princely magnificence. He is particularly remembered for building the great palace at Hampton, one he was finally obliged to present to Henry in 1525 in an attempt to regain his favour after failing to gain the by now, required divorce from his first wife.

Wolsey is one formidable diplomat, a statesman and politician from whom Cromwell can only learn more. Entering his employ in 1525 to assist in the dissolution of some lesser monasteries, Cromwell becomes indispensible to his master who wisely advises him “Be careful what you put in the king’s ear, because once it is there, he will fixate on it”. Henry VIII (1509-1547) a gifted man of intelligence, accomplishment and self-confidence had been until now contentedly married to Catherine of Aragon a witty, learned, charming girl who had given him a daughter.

When the subject of a male heir became an issue for Henry twenty years on and after Henry takes a tumble from his horse that seeming changes his personality overnight, he becomes obsessive about having married his brother’s widow unlawfully and sought an annulment or divorce.

In the first episode or two there are many movements afoot to depose Wolsey and Cromwell is kept busy endeavouring to help his master manoeuvre through them until eventually his luck runs out.

Welsh born actor Jonathan Pryce as Cardinal Wolsey gives a generous performance in just a few episodes, revealing he has just the right amount of dexterity and guile for a man of his age, wisdom and experience.

The son of a common man, a butcher as his protégé Cromwell is the son of a blacksmith, Wolsey is used to dealing with Prince’s like Henry’s interpretation of the scriptures and how they may be best employed and quoted to ensure his own argument at least sounds legitimate.

Having failed in his commission to the Pope at Rome to gain the King the annulment he seeks from Catherine of Aragon, now means that despite the King’s renowned affection for him Wolsey is dispensable and he knows it and despairs. There are many scheming nobles afoot who hate him too, as well as Cromwell his protégé for being lowborn. Fortunately for Wolsey, he dies on the way south to face the wrath of the King. God is merciful after all.

When Wolsey falls into disgrace in 1529, Cromwell enters Parliament where he becomes “the first statesman of English history. He attracts the notice of the King, gradually working his way into royal favour and entering Henry’s service early in 1530 the year that Wolsey dies.

Sworn into the King’s council toward the end of that same year he reaches Henry’s inner circle of confidential advisers a year later. At the same time he is also kept busy establishing his ascendancy in the House of Commons.

In 1532 Cromwell became master of the jewels and by 1534 was also principal secretary and master of the rolls. Appointed Lord privy seal in 1536, a position combined with a peerage, Thomas takes the title Lord Cromwell of Wimbledon. It was Thomas Cromwell’s influence and aegis that Henry VIII became Head of the Church of England as part of the strategy to shed his first wife. He wanted to outshine the princes of Europe and Cromwell was the man who would help him to gain his freedom to marry the girl of his choosing. Damian Lewis is Henry VIII wearing his bulging codpiece and designer coats made from ermine fur and gold, silver and purple fabrics, with both swagger and style. He is commanding as he negotiates the complexity of Henry’s character, his smiles often conveying far more sinister intent.

The costuming is wonderfully realised for all the players by BAFA winning designer Joanna Eatwell with painstaking accuracy, including tying them on with Tudor knots.

Anne Boleyn despite herself and interestingly takes to Cromwell in her own way, she sees that naked ambition in the back of his dark pooling eyes and recognises it from personal experience.

A man in a man’s world however, Cromwell has the upper hand because he’s moving in both the future Queen and the King’s circle.

With his lawyer’s mind and an overview of both courts he can endeavour to find the safest harbour for himself at least for a while.

Anne Boleyn however doesn’t help herself; a spoiled child in many ways, scheming and plotting, treating others with disdain she is not an endearing or enduring character.

Claire Foy is both emotionally complex and completely captivating as Anne Boleyn, giving a compelling performance. When the time comes for Cromwell to stitch her up by accusing her of adultery with her brother, he finds he can’t look her in the eyes, which blaze with defiance right up until her grizzly end.

She has been noisily indiscreet, regaling stories about her many admirers giving Cromwell the necessary ammunition to find Anne and her reputed lovers treasonable. Four young aristocrats are in his sights: Henry Norris, George Boleyn, William Brereton, and Francis Weston all of whom were involved in the plot to disgrace and bring about the death of Wolsey, appearing in a play at court entitled “The Cardinal’s Descent Into Hell.”

Thomas Cromwell, grieving for Wolsey, was watching in the wings and has a long memory. He sees an irresistible opportunity to avenge the shameful treatment of his beloved former master. The final moments in the last episode of the first series are riveting; Anne stony faced denying everything is hypnotic as she is allowed to avoid death by burning in favour of mercifully fast beheading with a sword.

As Cromwell returns traversing the length of a long gallery to give Henry the news, there are no words spoken as Henry with a vast smile on his face, gathers his loyal servant, whose eyes reveal only fear, into his waiting arms.

Author Michael Korda’s HERO is the story of an epic life on a grand scale: a revealing, in-depth gripping biography of the extraordinary, mysterious, and dynamic Englishman whose daring exploits, romantic profile, blonde sun-burnished good looks and flowing white robes, made him an object of intense fascination and famous the world over as “Lawrence of Arabia.”