The public persona of the National Trust is synonymous with preservation of old buildings, restoration of traditional gardens and exhibitions, which in Australia most often focuses on Victorian age style artifacts and the events that surrounded them.

I take great pleasure in reporting to you that in the latest exhibition at Tasma Terrace, The National Trust Australia‘s Victorian headquarters, they have bravely departed from the norm to stage artist Rod McRae’s Wunderkammer exhibition.

Amazing, thought provoking, sad and simply beautiful in execution it is the result of Rod McRae’s past five years exploration of sculpture, taxidermy and art installation.

It focuses on the need to conserve the natural world and the effect the behaviour of human species has on the diverse ecology and wellbeing of animal species. All of the animals in are ethically sourced and range from a polar bear to a zebra and from insects to penguins.

The installations are meant to make you think and to promote discussion on a broad range of issues which challenge us all – these include climate change, pollution, stewardship, hunting and animal-human relations. Pacemakers 2011 illustrates the uneasy relationship between scientist, doctor, patient and the victims of experimentation for human benefit: animals. In a sense it’s a guide to ‘all creatures great and small’ and how they are doing on Planet Earth.

The answer to this question is not very well.

Consistent human practices which include destruction of wildlife habitat, air and water pollution, illegal and legal hunting activities make it well-nigh impossible to be anything but pessimistic about the survival of the world’s bird, fish, reptile and animal species.

Nature has struck back by visiting not plague and pestilence, although this might happen, upon the human species but natural disasters of raging bush fires, blizzards, cyclones and tsunamis in ever increasing frequency.

It doesn’t take the oft quoted ‘rocket scientist’ to realize that current human behaviour is having a deleterious effect on all the world species and why exhibitions like Wunderkammer, which highlight imbalances in Nature and the Earth’s species are so important.

Simple and direct in concept Rod McRae’s dramatic installations feature taxidermy of animals, which, if not in trouble, soon will be. “If I want people to engage with important themes like climate change and conservation, I was thinking that I would garner the most empathy for the plight of the animal by showing them the animal in its own skin. I believe that art can make a difference.”

The above, a comment by Rod McRae, his installations and stand alone exhibits engendered in me a feeling of wonder – difficult not to be astounded by the intricate detail and beauty of his work. Some quite literally took my breath away… you don’t expect to be confronted by a huge polar bear or lounging lion after walking into a room at Tasma Terrace in the heart of the city. Because of the artist’s skill I also felt disgust and horror at the lack of compassion or acknowledgment that other species have a right to live in harmony with the human race.

Foxes, a much maligned animal classified as vermin, are featured in a number of exhibits.

Mating for life, Foxes live in family units and unlike humans, hunt not for sport but to rear their young.

…a fox suddenly raced across an open meadow, its tail flashing and ablaze with colour it ran free in its habitat of the English countryside.

I guess if you asked a fox whether he wanted to be removed from his homeland to be hunted and abused in other countries the answer would be a definite ‘No’. Similarly Hyenas as scavengers and killers of other species get a bad press.

Be aware that Rod McRae’s exhibit, The Case of the Laughing Hyenas is shocking in its dramatic intensity.

Hyenas burst from the showcase and it’s hard not to draw back from their thrusting teeth.

McRae planned this installation to show the difference between passive museum displays where an animal sits or stands in a leafy green dream-like environment and the reality of their daily struggle to survive.

This revolves around the hunt for food, a chaotic, gory and violent task. Similarly, the installation This Disney World.

It features deer and a rabbit in a Disneyesque situation, examining how far from reality the Disney characterization of Bambi and Thumper is; a world where animals smile and frolic beneath brightly coloured birdies singing a cheery tune…

…sure, they are really cute but their life isn’t.

Their instincts and gene pool mutated in a changing environment of depleted forests and vegetation with the availability of drinking water limited, dependent on a failing rainfall. In the installation, Serengeti, antelopes graze amidst members of their group whose heads have been severed by hunters for trophies, their bodies discarded as being of no consequence and therefore worthless.

This was a profoundly sad viewing experience and surely an indictment of modern society.

The exhibition installations also pose the question of whose population is out of control? Should we cull because some animals groups, driven by depleted food sources, have taken advantage of rubbish dumps and farm fodder to venture closer to human existence and in some cases endanger human life?

The world human population is rapidly expanding, outstripping the finite resources to feed and shelter all people.

Maybe the answer to artist Rod McRae’s question is in controlling both animal and human populations.

Wunderkammer is much more than an exhibition which features Rod McRae’s skill in depicting animals of astonishing beauty in situations.

It highlights the desperate situation animals in the wild face in a twenty first century, still ruled by a species who make no attempt to understand the needs of, or how to live in harmony with them.

It is a cry for help and it needs to be listened to and supported.

Will it happen? I hope so. 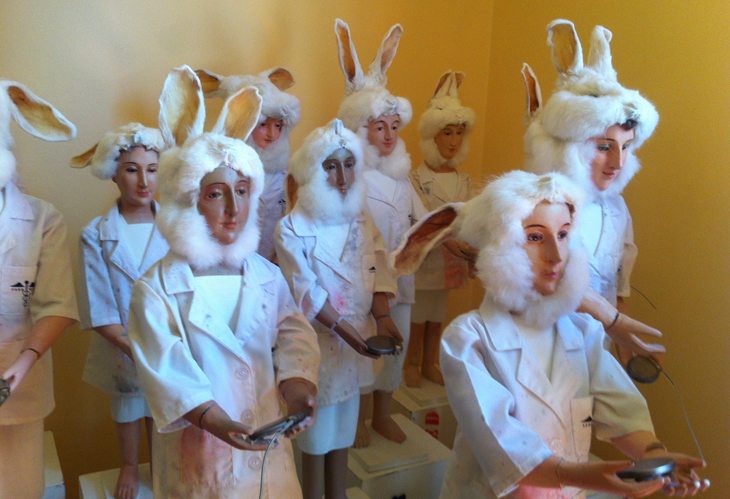 The truly momentous thing behind Rod McRae’s Wunderkammer Exhibition is how much better the human experience would be if we all accepted our responsibility to maintain and cherish other species – the natural world would blossom and so would all creatures great and small. 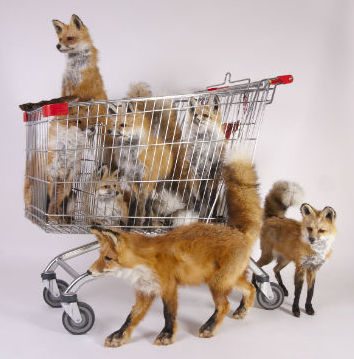 Wunderkammer: The Cabinet of Wonders