On Saturday 29th March 2014 accompanied by the spirited and sophisticated playing of the glorious Orchestra of the Antipodes led by Hobart Baroque’s resident genius music maestro Erin Helyard, the completely cool Catalan Countertenor Xavier Sabata, he with the voice of pure gold and a man with the most charming manner, wowed the crowd at Hobart Baroque 2014.

Sabata has become renowned for singing the villainous roles in opera superbly.

His recent recording Bad Guys reveals his gifts for drama and power to captivate the audience with his winning ways.

For this recital his transformation into a good guy was helped by him also performing songs of love on a program of ravishing singing, sending everyone into raptures.

He was entirely captivating in his “Bad Guy’s numbers, the soft golden honeyed richness of his tantalizing tone highlighted by a deeply felt vulnerability in those songs that shrieked of love.

They were indeed moving.

Like the glint of sequined splendour we could just make out subtly catching the light beneath his suit coat, Xavier Sabata became a star attraction of the Hobart Baroque festival as he sang effortlessly and with great élan.

Walking home along the waterfront afterwards animated groups of people that I encountered were rattling off the superlatives. Sabata was sophisticated, sleek and quite simply sensational.

His extraordinary athletic vocalism, his mastery of the stage and his sheer virtuosity proved that he was not only a master of his craft, but also is in the top echelon of excellence in the world of countertenors today.

Up went the cry – Viva Sabata.

The concert was opened with very fine playing by the stunning Orchestra of the Antipodes conducted and led by their enthusiastic experienced, energetic, multi talented and multi tasking musical director Erin Helyard from his harpsichord.

Their performance deserves to be heaped with praise and accolades.

Playing on priceless period instruments that provide a sound that is rich and round, this extraordinary group of performers presented the Sinfonia in C (RV 114) by Italian composer Antonio Vivaldi (1678-1741) with enormous verve and style, proving how priceless they are too.

There were three movements, the allegro, largo and ciaccona, which were all dispatched in scintillating fashion as they began to build the excitement and level of excellence we were to enjoy throughout a superb evening of which they were such an important and integral part.

Then out came Xavier Sabata, obviously determined to be at the top of his own game.

His body language revealed just a whisper of tension, which he quickly turned to tensile strength as he launched into his first aria Vo’ Dar Pace A Un Alma Altiera from Tamerlano.

This is another rarely heard opera from the German born London based musical genius Georg Frideric Handel (1685-1759), which Sabata is currently recording and will be available soon.

It was like the rapturous Handel opera Orlando we had heard the night before, full of good intentions and truly wonderful music.

Tomaso Albinoni (1671 – 1751) provided our next interlude as the Orchestra of the Antipodes gave us their poignant rendition of his Concerto A Cinque, Op 7 No 8 (1722), the Allegro, Adagio and Allegro. 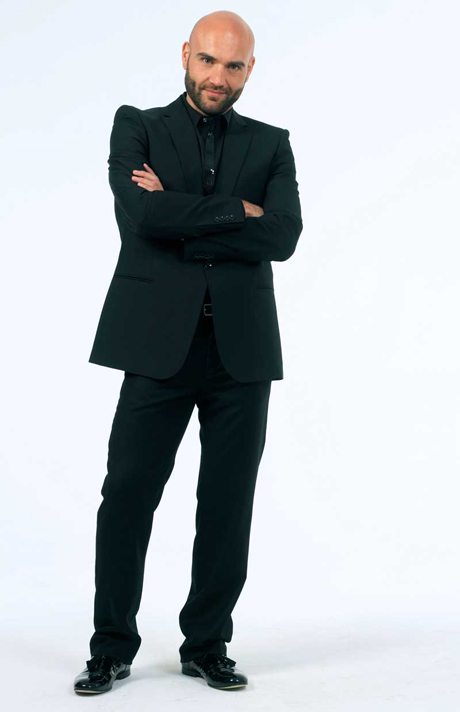 From Agrippina (1709) this clever addition only aided our superstar’s climb to the realms of glory.

He delivered a simply ravishing movingly rendered version of this glorious aria, which was superbly highlighted by Julia Fredersdorff playing brilliantly on her very special Baroque violin.

To complete the first half there was yet another showcase aria from Tamerlano, before we were sent out to catch our breath in the cool night air along the Hobart waterfront.

We all needed a moment to prepare ourselves for the rapturous second half yet to come.

There was no beating about the bush to begin. Sabata strode confidently onto the stage launching immediately into Handel’s Vibra Cortesa Amor from the opera Alessandro. It was dazzling.

Then all time favourite aria from the lead role in opera for all countertenors Giulio Cesare.

Sabata’s version of Domero La Tua Fierezza - the song of victory was exceptionally poignant; deliciously full of evil intent and ill will showcasing his dramatic intensity.

The Orchestra of the Antipodes then dazzled our socks off with another superb Sinfonia by Antonio Vivaldi – L’Incoronazione di Dario, which translates as the Coronation of Darius, in the opera of the same name.

They appropriately heralded the arrival of the Festival’s King with their own brilliant performance.

Truly this orchestra deserves a national program of sensational events annually. This number showcased just how simply stunning they all are as a multi faceted group as well as individual performers.

Sabata ended his onslaught of all our senses and captured our hearts for all time with the stunning Sovvente Il Sole from Andromeda Liberata and also his last number Odi Spietato Numi… Tu Spietato Non Farai from Ifigenia in Aulide. Xavier Sabata, chilling out in Hobart for Hobart Baroque 2014

He had the audience on their feet in a flash, beaming widely and applauding wildly while begging for more.

The sheer quality of Sabata’s sound, his masterly technique and the expressive nature of his whole demeanour on stage made this concert especially memorable.

The diversity, depth and style of the current group of world-class countertenors at the moment is breathtaking, as indeed Mr Sabata was on this particular night.

During his encore you could also have heard a pin drop as the appreciative audience held their breath so as not to miss a moment of his masterly magic.

The encore “Sorge bel petto” from Handel’s Rinaldo performed first at London, 1711) was the defining moment when Sabata entirely embraced the concept of his being truly a ‘good guy’ and the audience lapped it up.

The aria was delivered generously and with quiet reflection. We ended the night on a truly sublime high note with countertenor Xavier Sabata raising the bar of excellence to all new heights. Xavier Sabata, With the Orchestra of the Antipodes, Conducted by Erin Helyard

At Forbes Galleries New York Titian Meets West Side Story: The Work of Edward Melcarth (1914-1973) who admired the colors used by artists Titian and Tintoretto