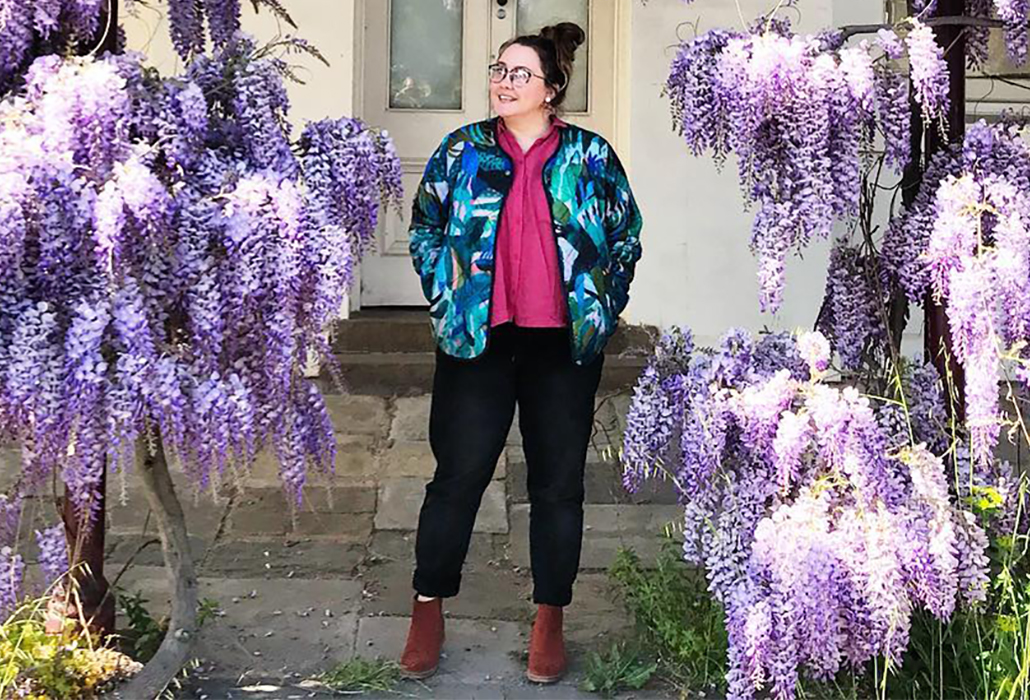 Nature responds magnificently to the human hand and heart by providing lush green beauty for the skin and the spirit, fulfilling the hope and wish of the founder of Yalu Apothecary, Naturopath, Rhiannon Mapstone, who will be hosting her first Christmas Pop Up Shop at 430 Chapel Street, South Yarra, Melbourne from December 10 to January 7, 2019. 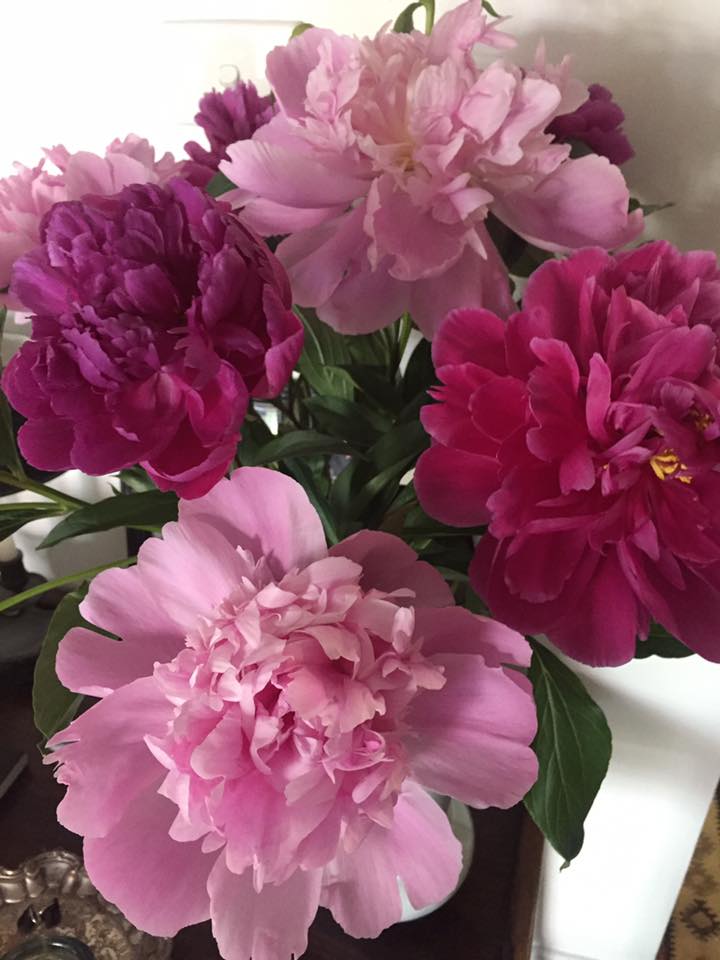 Rhiannon could be described as a dream weaver, one who is kept busy daily creating and making beautiful herb and flower based products to soothe the skin and through their scent, help to raise the user’s spirits.  Her aim is to nurture her friends and followers with the beauty of nature.

Rhiannon is a vital, vibrant young woman, one who is all about beauty of style. She knows harmony, grace and good rhythm depend on simplicity, although freely admits achieving that aim in business is more than often, very complicated.

It is an ongoing search for beauty and truth that confirms our ideals.

Our ideas of beauty and well being have evolved since ancient times where the fragrance of flowers played a vital role in many cultures.

They were expressive tools for a declaration of love, as a gesture of thanks, as a means of expressing sympathy, or as well as a means for celebration and congratulations. 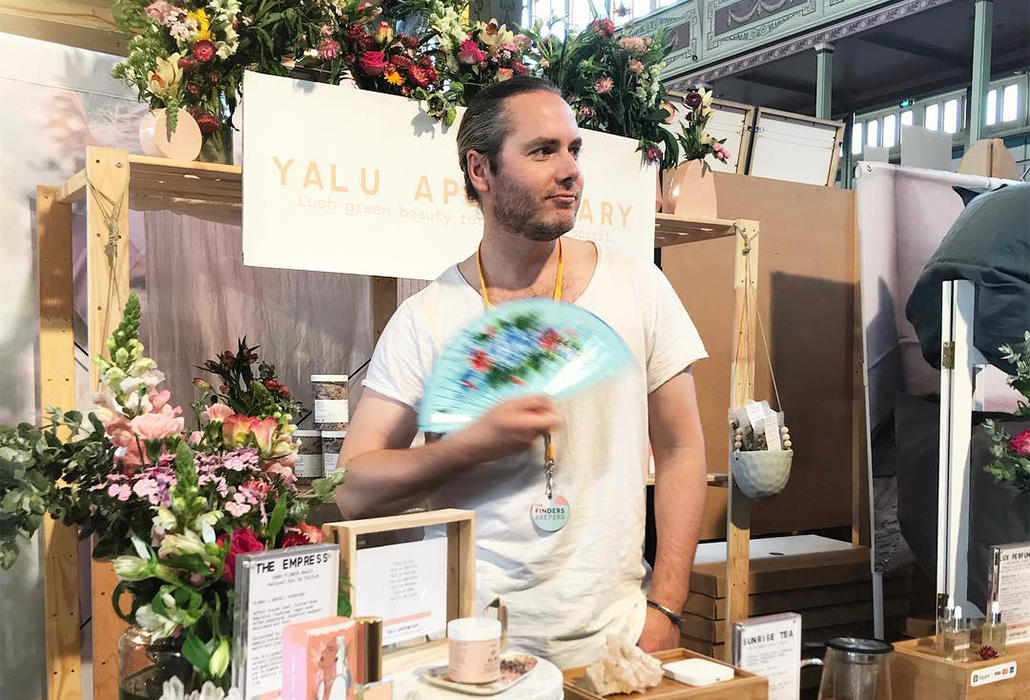 Rhiannon has strong personal support and love of her husband flamenco guitarist Gerard Mapstone, who helps when he can to present her products in both city and country markets as well as through select retail stores. You can also catch them both at Coburg Night Market on December 7, 14 and 21, 2018.

Their pervading sense of joy in what they are doing together is infectious. Humour and heart are at the very essence of their being both personally and professionally. 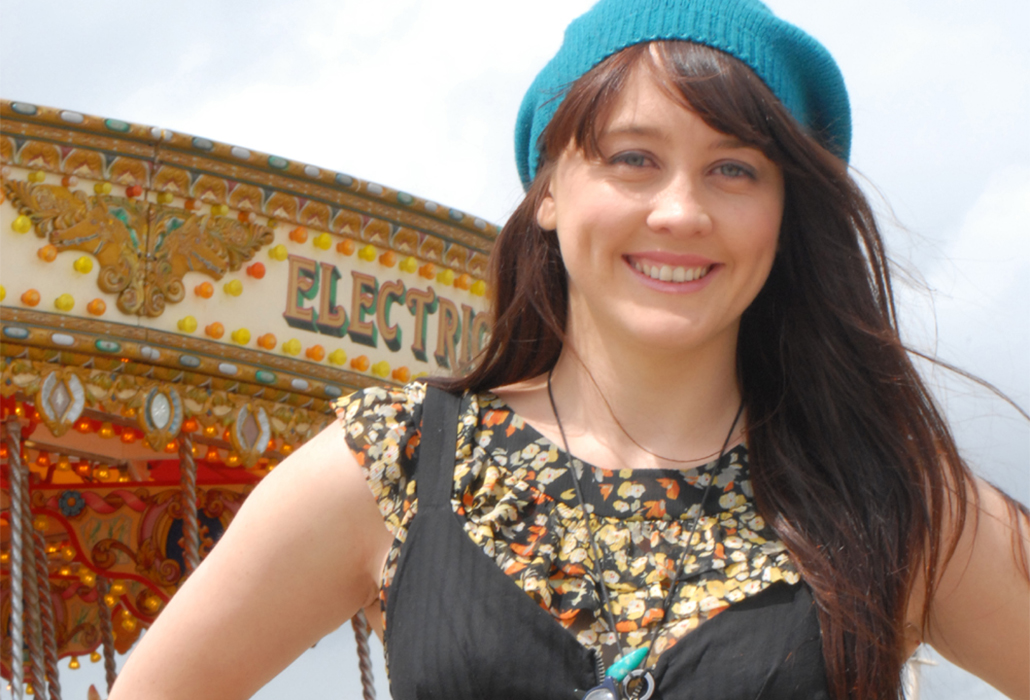 Recently I asked Rhiannon if there was a defining influence or moment, which inspired or fostered the growth of her interest in the art of well-being. What was it that caused her to favour it over an early career in music she was enjoying when we first met?

She discussed how there was not really one particular moment, but a series of heart-crushing events, which ushered her into the natural health field.

“Music was always my first love and I thought I would do it till my dying days” she said. She suffered a terrible injury, which caused both physical and mental pain – ” I was badly attacked by someone during the time I released my first solo album, which left me with permanent knee damage” she recalled. 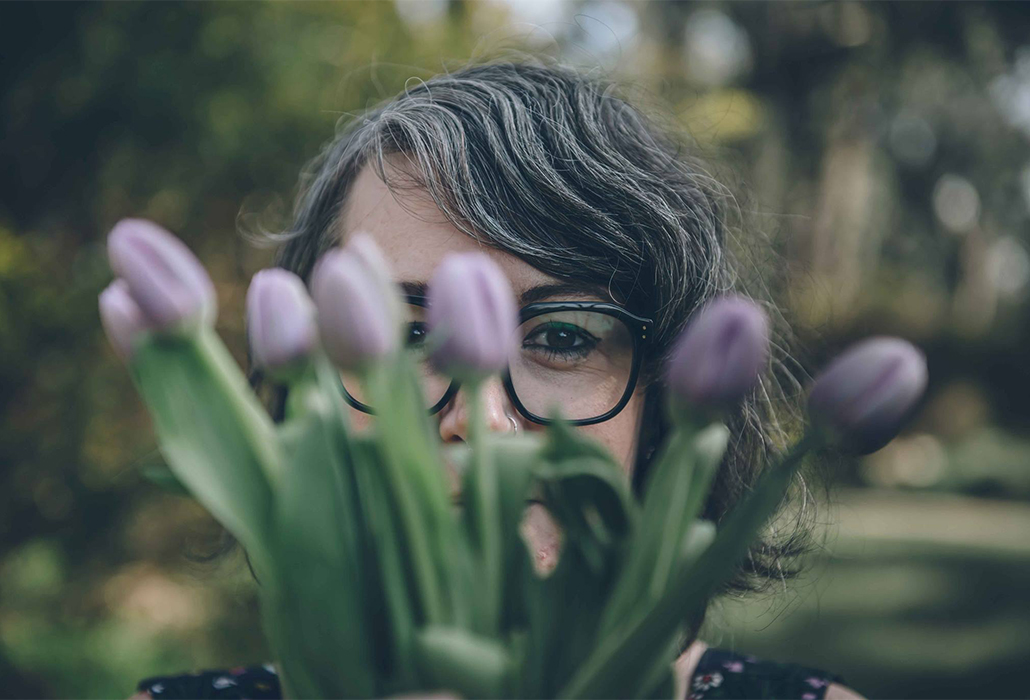 Its aftermath, included Rhiannon developing PTSD (Post Traumatic Stress Disorder) and she found she had to give birth to a wholly new and very different version of herself in order to both survive and thrive.

Such “… experiences… have a way of recalibrating who you are” she said “… I had to find a new way to positively reconnect with the world around me” she said reflecting on what is a painful memory.

At the right time however she found an ad in the paper, deciding to study Naturopathy “… it was all about learning anew… scary, exhilarating and life-changing” she said… 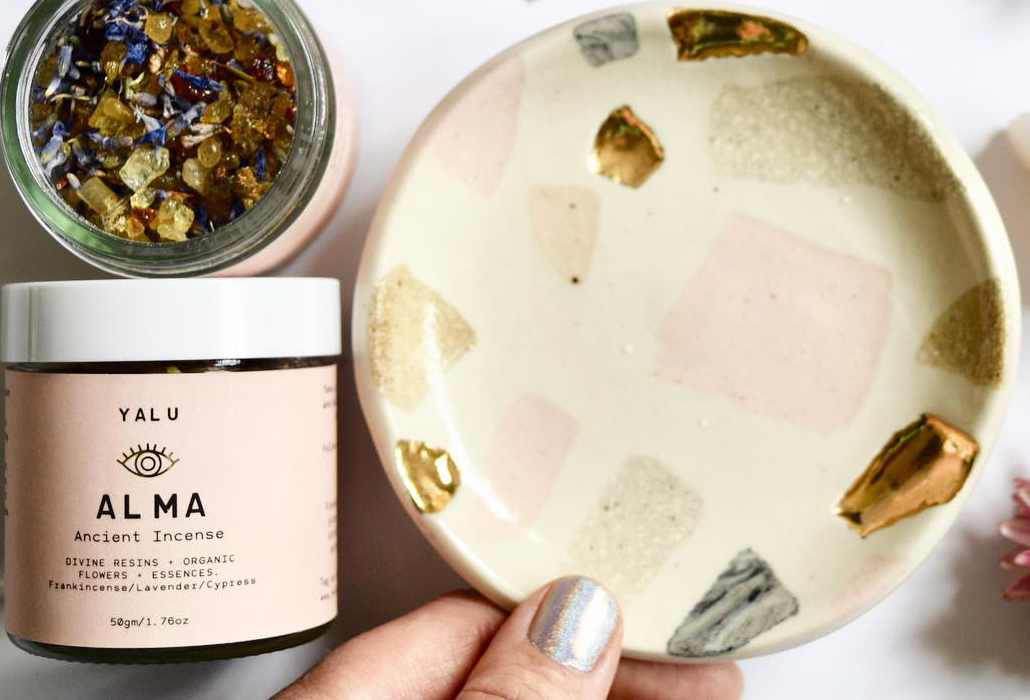 “… and it involved working with flowers, herbs and some of nature’s most evocative products” she noted, so, it was indeed very appealing.

Rhiannon had since childhood been incredibly interested in working with nature in a hands-on capacity. The art of mixing and concocting recipes for health and well-being was always attractive and she believes she was always a product developer in the making. 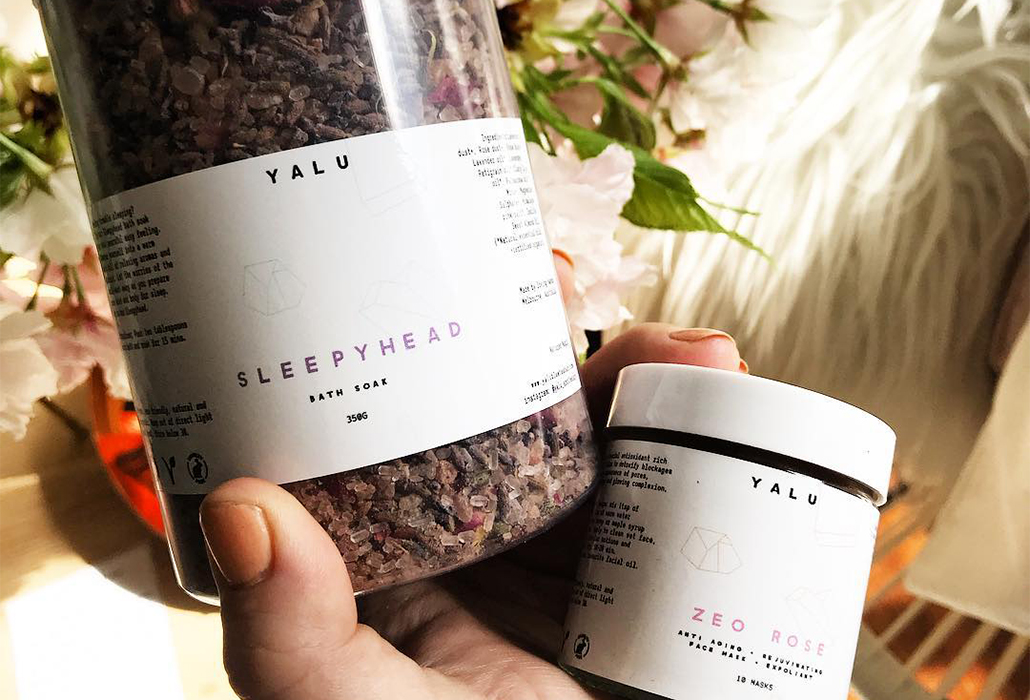 “Some of my earliest memories” she recalled… “are mixing my mother’s expensive face creams up and applying them to my younger brother’s face, much to his delight.

Sometimes we squished roses and lavender together into spray bottles and called it perfume!”, a memory that caused her to laugh as she reflected on the images it brought to mind. 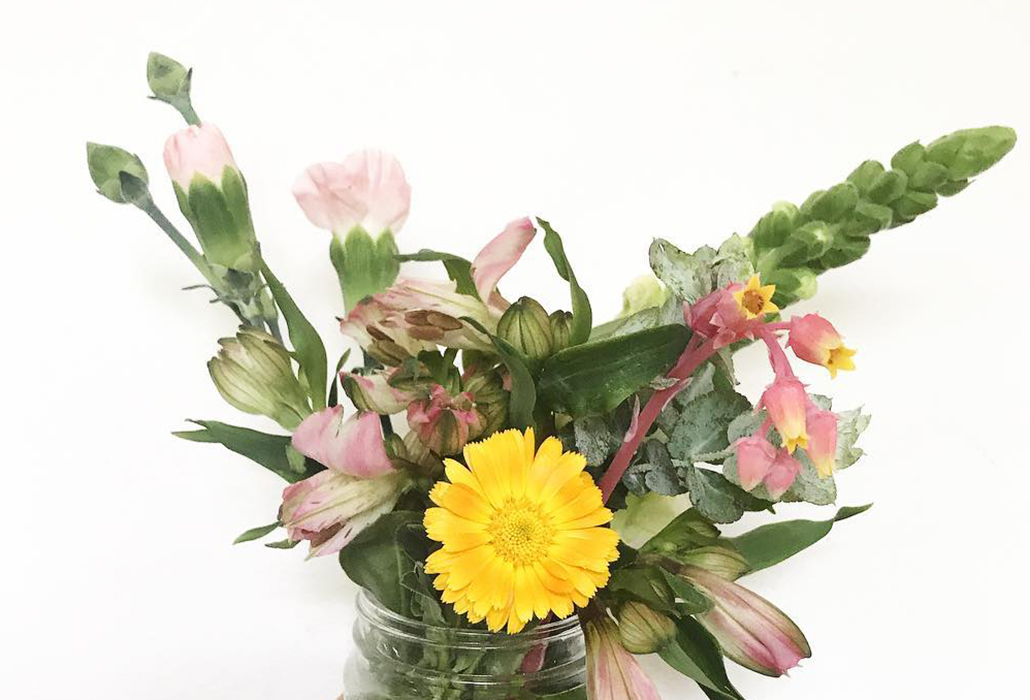 “How long ago” I asked, “did you decide to found your company Yalu Apothecary and has the journey to reach the point you are at now been challenging? If so what are the biggest hurdles to surmount?

“After years of working in Naturopathic clinic, for health food companies and health food stores, I found a side job working for aromatherapy company Perfect Potion in Melbourne City” she answered. 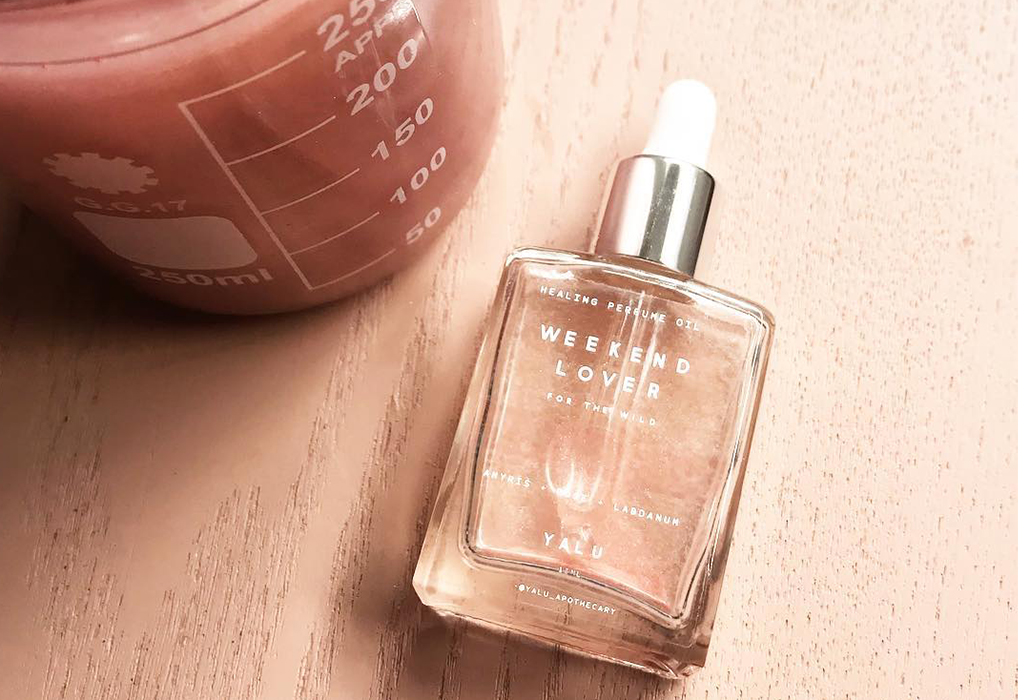 She reflected “It was only meant to be a Christmas job but I ended up staying on a lot longer than expected. I loved working with all the essential oils. Each day I learned something new. Once the work dried up, I realized it was my time to start something that was mine”. 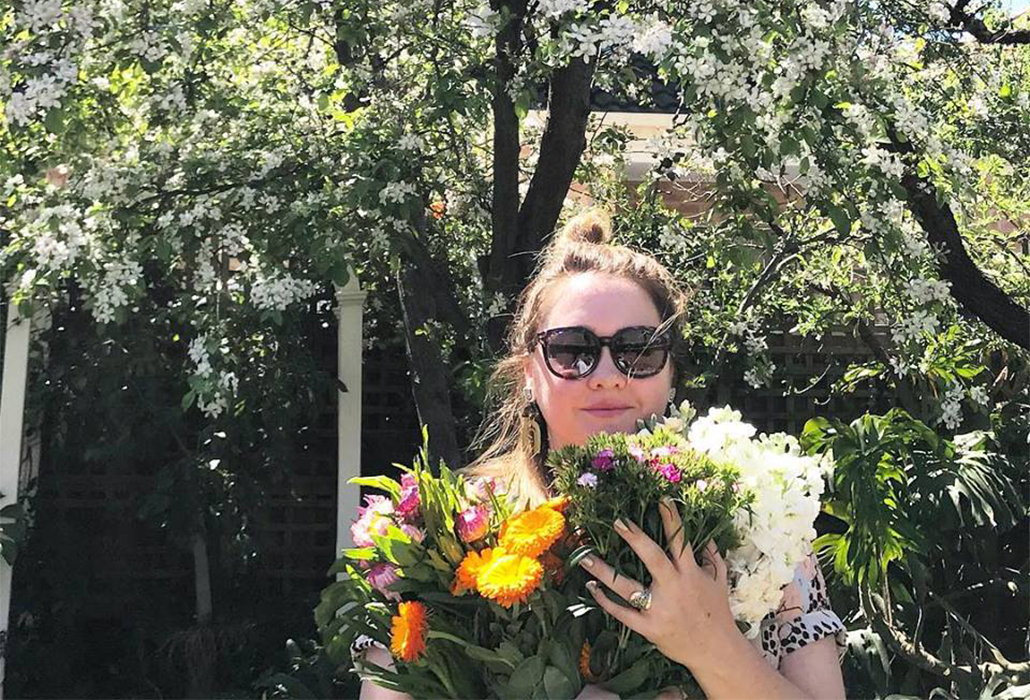 This November will be the third anniversary of Yalu Apothecary, during which time Rhiannon has worked on key products including herbal teas for morning and night, perfume oils, sleep mists and bath soaks, which have gained a wide following. 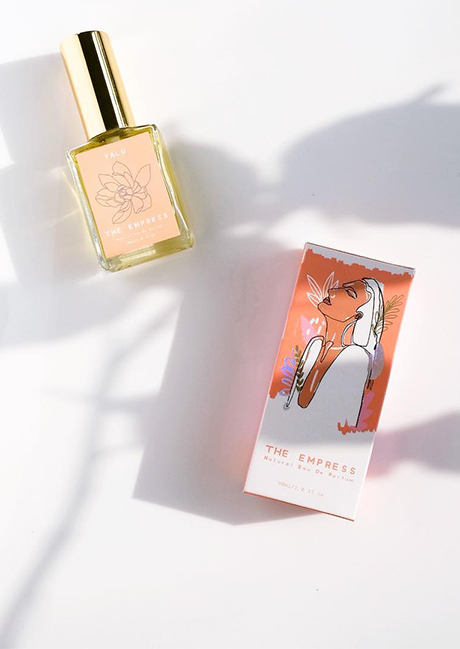 Having just launched her first perfume, The Empress, I asked Rhiannon would it be the first of many?

Yes, was the reply. “! I can’t explain to you just how thrilling it feels to have come this far” she said, before continuing…

“Truth be told I tried to start making perfumes when I was about 26, gigging and working in a bank. I thought “I’m going to make luscious perfumes by day and be a chanteuse by night”. 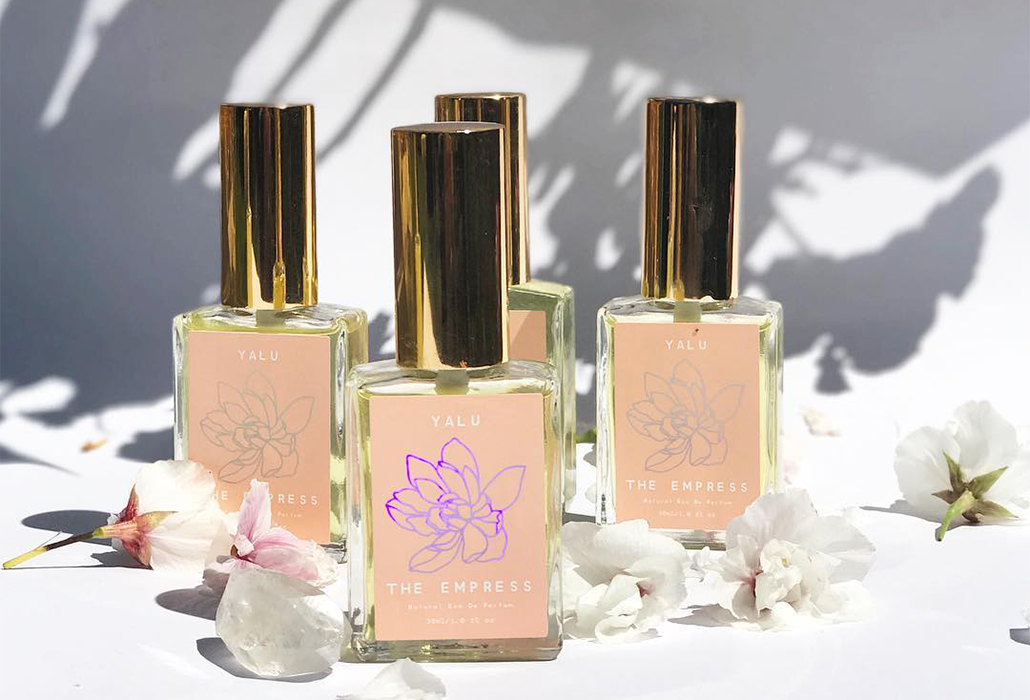 Dreams are always an important part of anyone’s journey.

However, there were in reality many challenges for her to surmount.

Rhiannon quickly learned making perfumes was A LOT harder than she anticipated. On her lunchtime breaks she would spend time in David Jones’ ground floor smelling “all the French perfumes and dreaming a little”. ‘

Now having just released her first beautiful scent, Rhiannon recalled how she burned through thousands of dollar’s worth of materials, learning how to blend them and understand the mystery of creating a fragrance. She had to find for herself the key ingredients, which marry up botanicals in a harmonious union of great joy. 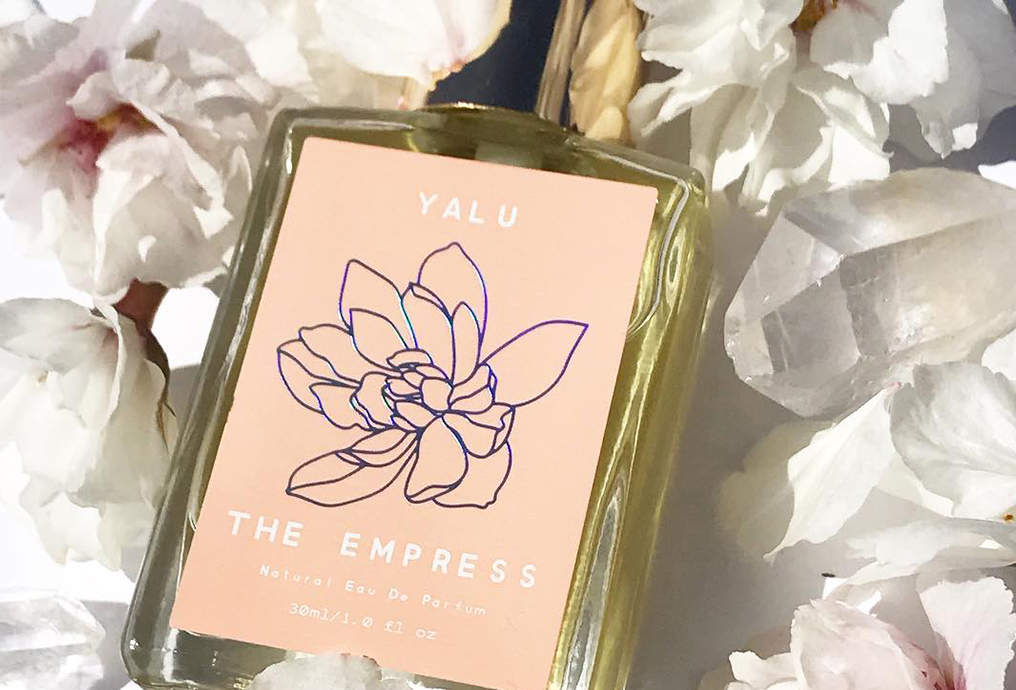 The Empress will be the first of many 100% natural Eau De Perfumes by Yalu Apothecary. “I have my absolutely brilliant artistic team working on designs right now for a unisex earthy + woody perfume called Velvet Underground and an elegant woody floral with a hint of honey fruit called La Sonata” she said.

“The Empress is a green floral that truly takes you on a journey, through the forest, and into the garden. Top and base notes of Violet leaf, cedar wood, Calabrian bergamot and rich heart notes of roses, magnolia, tuberose and musk and, I have at least another ten perfumes in progress” she said 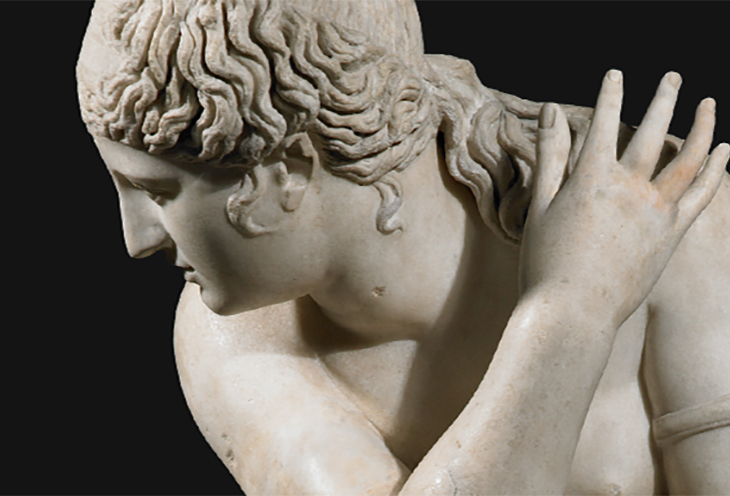 Ancient Greek philosopher Aristotle (384-322 BCE) said man ‘takes pleasure in the odours of flowers’ indicating he enjoyed the sensory feeling when he engaged with their beauty and scent. He also studied nature, attributing plants as having ‘their own specific type of soul’.

Rhiannon reflects “… nature is an ever inspiring constant in my life. I learn through her four seasons and she shows me her many delights. 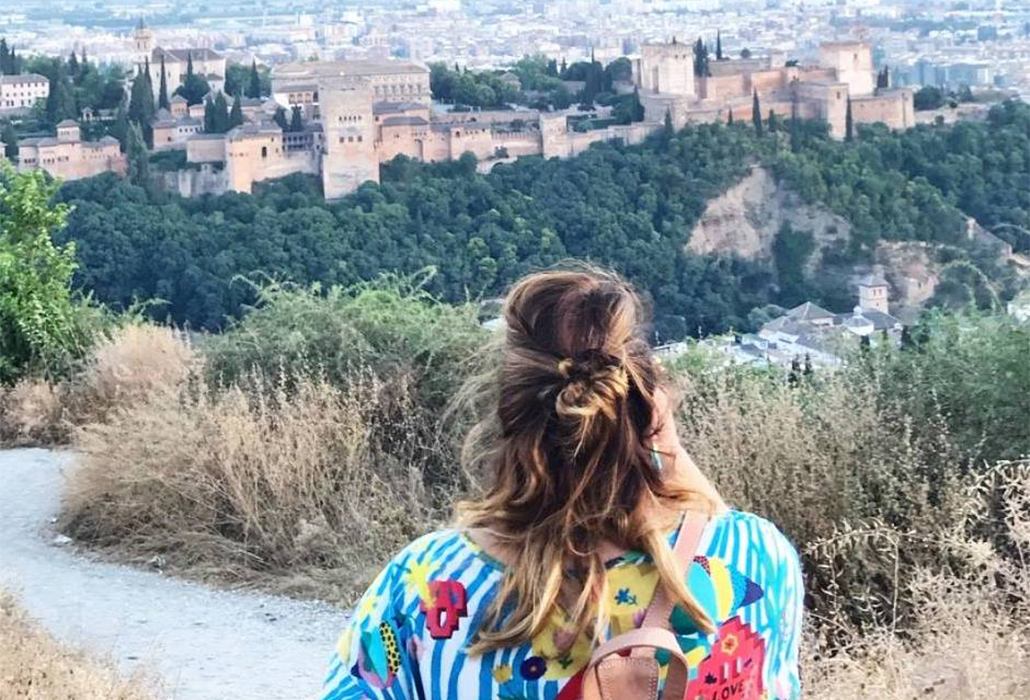 This year in order to understand the nature of beauty both natural and man made, Rhiannon and her husband Gerard took in the delights of Spain’s most famous garden – the Alhambra, constructed in the fourteenth century by the Nasrid Sultans. The summer breezes from the Sierra Nevada range still keep the gardens cool, while high walls protect a series of unroofed enclosures in which water rushes through marble channels or curves in graceful arching jets that cooled the air and filled it with a pervading sense of beauty.

Next year Rhiannon and Gerard will be heading back to France the home of perfumeries. They are also hoping to have a stopover in the USA to visit prominent natural perfumers, where Rhiannon will seek to continue her journey by expanding her knowledge. 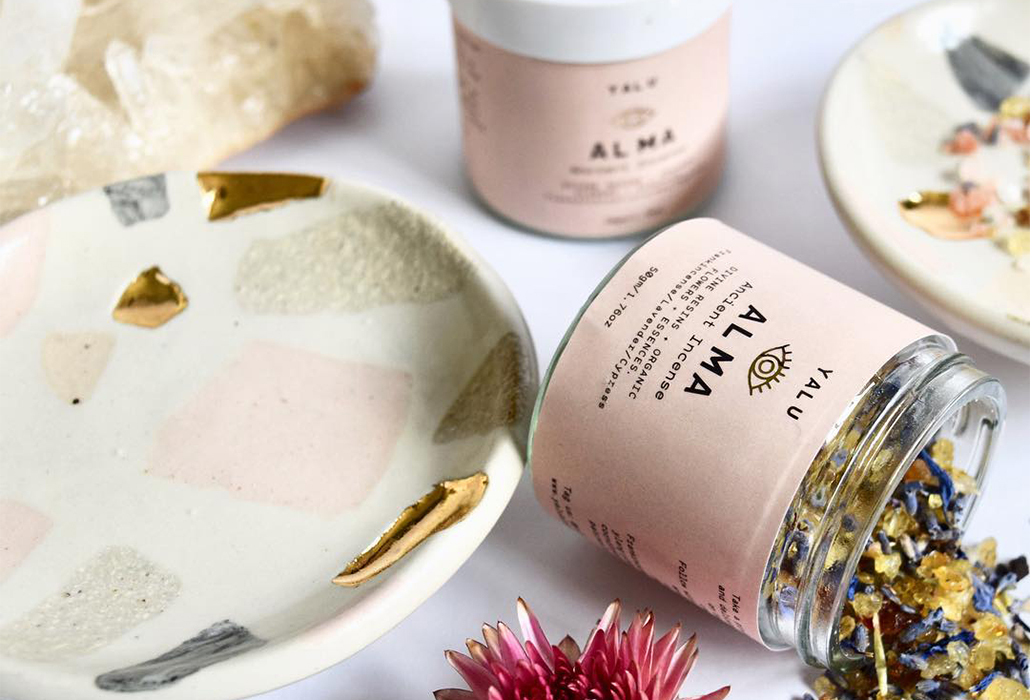 “While I love creating my herbal teas and green beauty products, I think my heart truly lies within the Art of Perfumery” says Rhiannon. 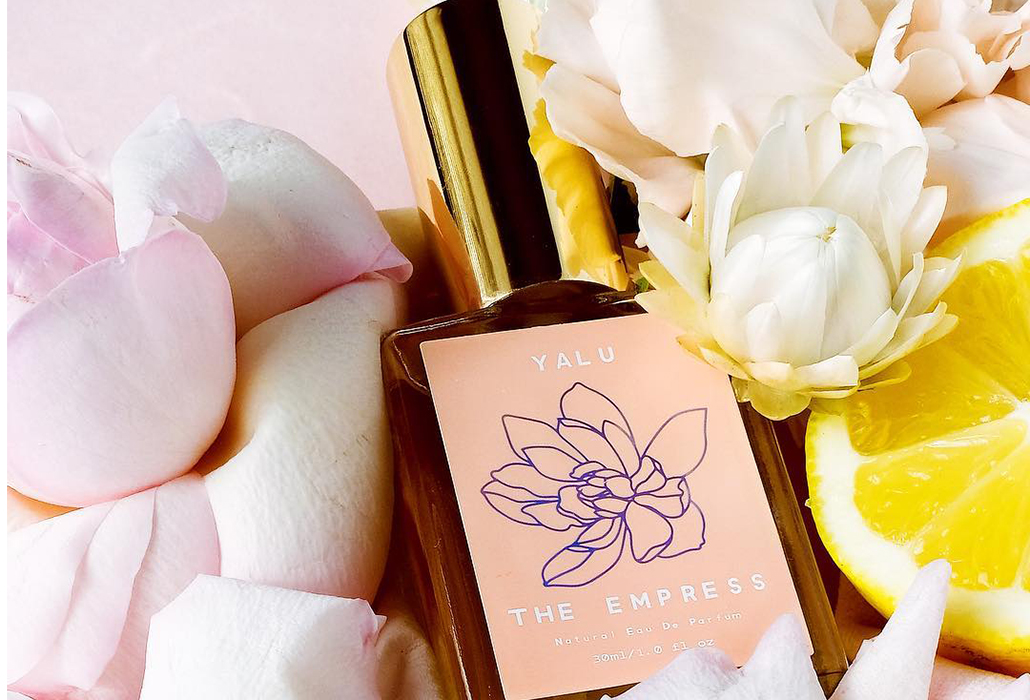 Beauty is as beauty does and it is the journey, which is at the essence of Rhiannon Mapstone and her products sold through Yalu Apothecary.  She is indeed a creative young woman of influence with a passion for helping others to be who they really are. 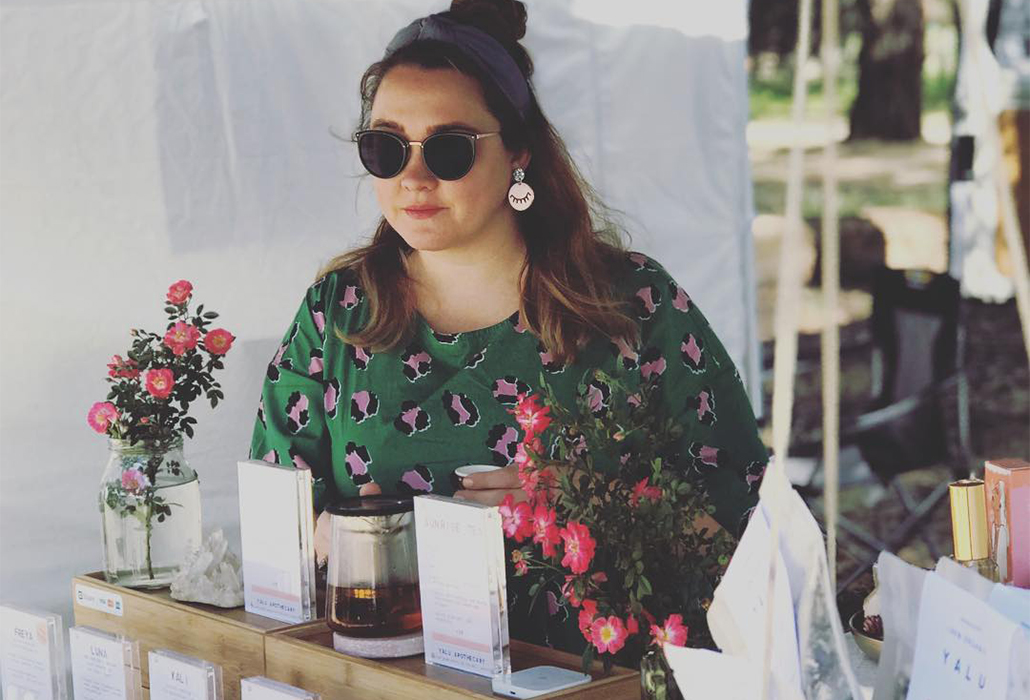