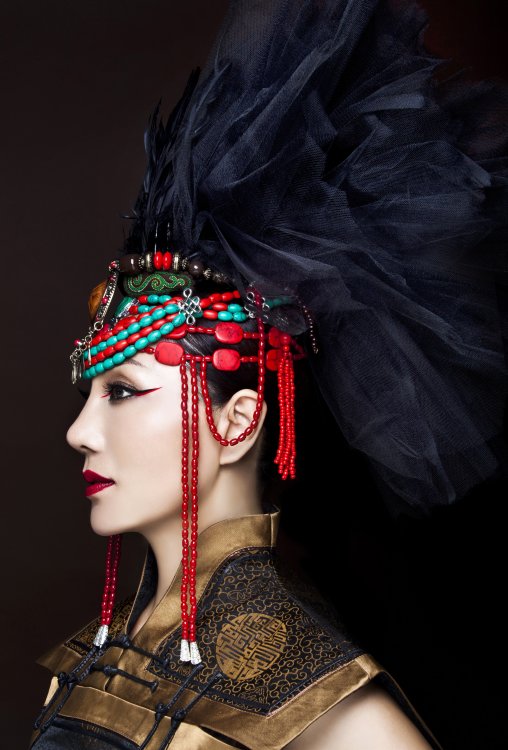 Aoyun Gerlie mezzo soprano, guest of the Queensland Symphony Orchestra for their concert The Year of the Monkey, photo courtesy artist, ACCCA and QSO

Chinese New Year in 2016, The Year of the Monkey will be celebrated in style at Brisbane when the Queensland Symphony Orchestra, supported by the Australian Centre of Chinese Culture and Arts, will perform on Thursday 11th February, 2016 in the stunningly renovated concert space under the dome at Brisbane City Hall.

This will be a concert not to miss.

Each year the QSO attracts the world’s best conductors and soloists as part of its acclaimed concert season, in addition to presenting unique blockbuster events.

For their 2016 season they are offering many ‘transformative moments’ through their Maestro Series, Morning Masterworks, Music on Sundays, Chamber Players, Choral works and other special events.

Guests for the QSO The Year of the Monkey Concert include Conductor Darrell Ang, Cellist Li-Wei Quin, Mezzo Soprano Aoyun Gerile, on Ehru Ma Xiaohui with Yingdi Sun on piano.

Fusing two cultural traditions in music, the concert will feature the dazzling Reflection of a vanished time (Reflet d’un temps disparu) for cello and orchestra by Chinese composer Qigang Chen (b1951-). The conductor for the evening Darrell Ang is a pre-eminent young conductor, a regular guest with some of the world’s greatest orchestras.

Having studied at St. Petersburg and at Yale University Darrell Ang was mentored by Lorin Maazel, Sir Colin Davis and Esa-Pekka Salonen.

He has been the Music Director of the Orchestre Symphonique de Bretagne since 2012.

Chief Conductor of the NTSO Taiwan-China Youth Orchestra, Darrell Ang was at the heart of an initiative bringing the best young musicians from China and Taiwan together.

He led them in a series of concerts at the national concert halls of Beijing and Taipei. Cello soloist will be Li-Wei Quin, an acclaimed chamber musician with a ‘meltingly beautiful tone’.

He has performed with Rundfunk- Sinfonieorchester Berlin, London Philharmonic, Prague Symphony, BBC Symphony and Sydney Symphony. A regular guest at the Wigmore Hall, the BBC Proms and the City of London, Jerusalem, Rheingau and Mecklenburg-Vorpommern Music Festivals Li-Wei Quin’s recent appearances include appearing with the Adelaide, Melbourne and Singapore Symphony Orchestras.

He also recently recorded the Elgar Cello Concerto with the London Philharmonic Orchestra. The very lovely Ma Xiaohui is back to win many new fans for the Erhu.

This is a very stylish, traditional Chinese string instrument that can trace its origins back more than a thousand years.

She previously performed her elegant Erhu music at the Asian Pacific Screen Awards Ceremony at the Gold Coast in December 2010.

Known in the west as a Chinese violin although the Erhu has two strings it has no frets.

Held virtually vertical, the bow is strung between the two strings (which are very close) and bowing causes both the strings to vibrate. The left hand alters the tone of the strings by pressing on the string at the normal harmonic points.

Ma Xiaohui is known well for recording the music for the film “Crouching Tiger & Hidden Dragon“, performing the theme music together with international class Cello Master Yo Yo Ma.

She has extended her ancient versatile instrument’s boundaries with her own new tone colours and fully developed technique.

Mezzo Soprano Aoyun Gerile lead soloist for the China Opera and Dance Drama Theatre who is well known for her sweet grassland songs will be sure to woo the crowd.

Aoyun’s first album Flower Lake and Grassland became the top selling album on China Audio and Video Network in the first week of its release. Her most recent album ‘Love of Nature’ includes all her top ranking popular singles in recent years.

In 2004, he was awarded a grant from Yamaha to present chamber music concerts with prize winners from the International Paganini Violin Competition and Tchaikovsky International Music Competition. The QSO, with a history dating back to 1871, has been wowing the crowds in Brisbane with their passion for live symphonic music. Over that period they have become renowned for their innovative programming and touching the hearts of Queenslanders and visitors to Brisbane through the sweet sounds of music that enriches lives. The main aim of the Australian Centre of Chinese Culture and Arts is to introduce mainstream Australia to fine Chinese culture and performing arts.

This concert promises to be exceptional.

Queensland Symphony Orchestra
THE YEAR OF THE MONKEY – Concert

Well the world is agog this morning with the announcement that the favourite royal Prince, William, will finally marry the girl of his dreams after a long courtship. Kate’s wait many believe is now over and she has finally nabbed her prince, but will she be a princess? Well, yes eventually. However it seems that Katherine as she will now be known, will have to continue to play her waiting game if normal tradition and protocol is to be followed. So what will Kate, now not waity be?