Yoko Ono, with her artwork at an exhibition at Schirn Kunsthalle Frankfurt, Germany February 14, 2013 celebrating her 80th birthday Detail Photo by Thomas Lohnes

This summer at Sydney for the Sydney International Art Series The Museum of Contemporary Art Australia (MCA) will present the first major survey of legendary artist, musician and activist Yoko Ono.

The exhibition WAR IS OVER – IF YOU WANT IT will showcase eight participatory works whose themes include loss, conflict, humanity and the desire for world peace.

This is the fourth year of the series, which according to Arts Minister George Souris has been ”good for the soul and the state economy” bringing 1 million visitors to Sydney so far.

Yoko Ono said “I am very excited and honoured to have my first solo exhibition in Sydney. It is an incredible new show I’ve developed just for you. There are many fantastic installations and participation works from different times. Think peace, act peace, spread peace Sydney.”

MCA Chief Curator Rachel Kent added: “The exhibition reaffirms Ono’s firm belief in the power of human agency – specifically, people’s ability to dream of and work towards a better future together.” It was only made possible after she made a trip to Sydney in December 2011 so that she could personally approve the space. Making peace and love, not war was a philosophy of life they shared and wanted to influence the hearts and minds of their generation about.

An active member of the New York avant-garde art scene, during the second decade following the end of World War II, Yoko Ono had been born in Tokyo in 1933 before it had all started.

Early in her own career Yoko Ono created ‘instructions’, written texts that invited the viewer to participate in the creation of their meaning.

Lennon was one of those who climbed a ladder at the Indica Gallery in Lonon in 1966 to read a tiny piece of text she had left on the ceiling – the word ‘Yes”. She made sculpture, drawings and music some of which was influenced by Zen Buddhism, explicitely pacifist.

Described by her husband as ‘the worlds most famous unknown artist, now in her eightieth year Ono is still considered an important ‘international thinker’, one whose ideas and thoughts are often found to be quite unexpected.

Many of the works that will be on display are metaphoric, suggesting the ideas she wants others to embrace, have empathy with and evangelise, rather than spelling it out for them.

As well, she became heavily involved in pro-peace activities on a global scale, and together with Lennon, created numerous events that supported their ideas surrounding world peace and anti-war campaigning. Together they both became symbols and icons of the peace movement, with his songs adopted as anthems of the anti war movement until he was brutally murdered, shot in the back on 8th December 1980, a horrific act. 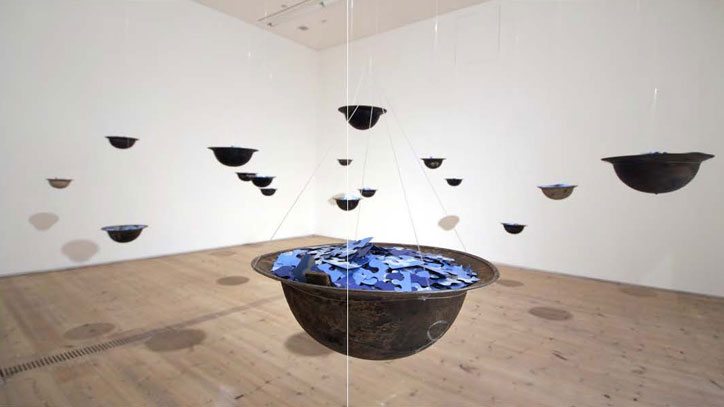 Ono was only 12 years of age when Hiroshima was bombed, a landmark compelling world event that ended the war in the Pacific and has since shaped much of her life’s journey.

After completing her schooling, she initially spent a year studying philosophy at Gakushuin University, Tokyo and then following her arrival in New York, Yoko Ono studied music, including opera and concert piano, and poetry at Sarah Lawrence College from 1953.

Her own art works subsequently became a blending of poetry, music, visual arts, film and performance art, because she wanted always to involve the viewer at a personal level in what she was endeavouring to achieve. One event “Cut Piece” a performance art work she presented at Carnegie Hall in 1964 was considered by many to be indeed ‘shocking’, because she allowed members of the audience to cut her clothes to shreds.

As part of Ono’s visit to Sydney for the opening, Sydney Opera House and the MCA will present In Conversation with Yoko Ono: War Is Over! (if you want it)  at the Sydney Opera House, where the artist will speak with Senior Curator of the MCA Rachel Kent, who has worked with Ono throughout the realization of this project.

I Love My Mummy in which gallery visitors will be invited to write messages of care and forgiveness to their mothers and pin them to a wall is sure to be popular. Another major installation Telephone in A Maze  (1971/2011), arranged as a transparent, maze-like structure that visitors are invited to walk through also.

At its centre sits a telephone, which Ono will ring periodically over the course of the exhibition, speaking to whoever answers her call.

Other interactive works will include Play it by Trust  (1966/2013), a series of purpose-built chess tables for gallery visitors to engage with one another over identical sets of white chess pieces, and her Mend Piece  (1966/2013) features a communal table where visitors work together and repair broken crockery. Her Wish Tree, considered symbolic of the collective power of our hopes and dreams, will be displayed out on the MCA Sculpture Terrace, where visitors will be invited to write wishes on cards and tie to them to the branches of native Australian trees.

The idea is that as they accumulate, they will hopefully blossom into a whole new philosophy that can be a benchmark for many for the future of their journey in life.

An archival room of ephemera spanning the 1960s to the present featuring posters, album recordings, conceptual objects, experimental films and the artist’s self-published instruction book Grapefruit will be integral to the show.

Public Programs will include talks, banner making workshop, a picnic on the MCA lawn, language tours and baby friendly art experiences. A festival atmosphere of art making with live music and good food will developed by teenage members of the MCA Youth Committee for their own generation. It is all about providing an opportunity for their peers to meet like-minded people and established artists

A musician and performer in her own right, Yoko Ono has been a pioneering conceptual artist and an ongoing activist in the spirit of her late husband. She champions gun control and is against ‘fracking’, the extraction of natural gas by cracking open shale rocks below the earth’s surface at great ecological cost.

Yoko Ono is a free-thinking visionary, not caring a zot for geopolitical reality, outspoken despite being quietly spoken. She exudes energy and although her age is revealing a few cracks in her veneer she continues to transform herself to meet the challenges and needs of the times.

She believes people change things, not politicians or corporate power and that is best to ‘have no fear’ and that we all should stand up and be counted whenever or wherever we can.

Negativity has no say or place in her world of positive peace activism, where she says the future is now. Its really happening and we should be inventing ways of helping humanity rather than destroying it.

For her 80th birthday in February 2013, the audience sang Give Peace a Chance, which is more or less what she wants everyone to do.

The Yoko Ono exhibition has been made possible with the support of the NSW Government through its tourism and major events agency Destination NSW and is supported by EY and Media Partner Channel Seven. 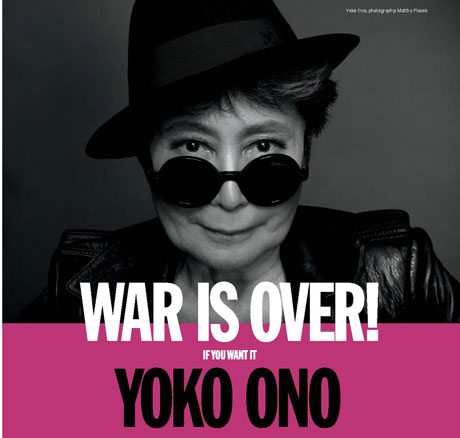 If You Want It

An 18th century village master craftsman, who designed and made furniture in rural Yorkshire Thomas Chippendale (1718 – 1779) was a progressive ambitious chap