Australians have retained a tenuous link to their British roots via the detective drama television series Inspector Morse that ran from 1987 – 2000, based on a series of novels by Colin Dexter. We were not permitted to know the given name of Chief Inspector Morse, played so brilliantly by actor John Thaw, for a long time. When it was finally revealed in an episode in 1997 to be ‘Endeavour’, it took everyone by surprise.

Turns out that Morse’s father had been a fan of ‘Captain Cook’ and his achievements. As Endeavour was the ship Cook sailed in to discover Australia, Morse’s father gave this rather earnest name to his son. No wonder the poor chap asked everyone to call him Morse, what a moniker to live into. John Thaw was so convincing and he became so iconic in the role of Chief Inspector Morse that after he died in 2002 any thought of continuing the story without him was seemingly put to rest. That is until recently. In 2012 a new television series ‘Endeavour” was announced.

It was to be a story about the young Morse at the beginning of his career staring Shaun Evans as DC Endeavour Morse. There was first a pilot that was well received, and then the series came to the screen in London early in 2013. It’s now arrived like the original Endeavour down under, and will be showing on Channel Seven beginning June 9th, 2013.

Set in the glorious city of Oxford, where sandstone towers representing panoply of history abound, the scenery is spectacular, the settings often sublime and the story line wonderfully conceived.

At first glance the four episodes follow the original formula as Morse becomes involved a murder investigation, which shows a complete story. However in this series, like many contemporary American series, there is also a continuing background story running through all four episodes.

This new series builds on many of the elements that formed part of the mythology of the original series and features Shaun Evans, who is a bright new television talent. 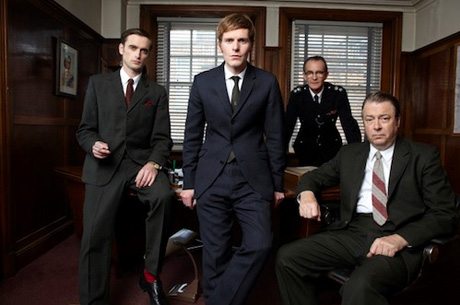 Evans is not only completely convincing as Morse in his youth for those devotees of the first series, but also a brilliant young actor of whom we will surely here more.

We come upon him singing in the choir and then going home to his simple room where he is studying ‘Moriarty’s Police Law, the eighteenth edition.

Keep your head down and your nose clean – concentrate on your police work and learn your trade is Thursday’s advice to young Morse, who must ‘solve the puzzles’ if he is to save others.

The characters are based on those invented by author Colin Dexter. However this whole series is wonderfully written by Russell Lewis, whose credentials include an episode of the original series and landmark British television series the The Bill, episodes of Hornblower and Kavanagh QC, which also starred John Thaw. Then there was Lewis the spin off from the original Morse television series featuring his able sidekick Robert “Robbie’ Lewis.

On his first day at the station young Morse comes under the eye of the newly appointed Chief Superintendent Reginald Bright (Anton Lesser), who declares he plays fair, although we soon learn he doesn’t.

He’s also involved in the politics of the station office, where Detective Inspector Fred Thursday (Roger Allam) discovers that his new recruit has a bright and innovative mind and seeks to become his mentor. Detective Sergeant Peter Jakes (Jack Laskey) who is the preferred offsider of Detective Thursday, that is until Morse happens along, spends most of his time trying to put him down, prove him wrong or put him back in his place.

Right from the start Endeavour Morse is an ‘outsider’, not really one of the lads who has risen gradually through the ranks as you should in a hierarchical institution, but one who gains his status based on merit.

This was not something that went down too well socially and culturally, especially at that time.

Rising above your station in life by distinguishing yourself by using your brains was not an admired trait and it didn’t ever endear you to your colleagues.

Morse often appears crumpled. He’s an independent soul, who looks after himself as best he can on the poor salary the young trainee Morse is undoubtedly paid. He is living in fairly dingy digs where the only way to gain any warmth is to feed the gas meter with shillings.

The first murder is that of a young woman and the young Morse shows off his intellect immediately by identifying the colours of a scarf in her room as those of an all male school. It had been almost dismissed by Police Constable Jim Strange (Sean Rigby), who unbeknown to him is destined to become an older Morse’s boss. His role is handled with great warmth and humour.

Every story has a beginning we learn, and every story has its hero. Young Morse is that man in this brilliantly conceived first season of four episodes. Not wanting to include spoilers or elaborate on the plots, subplots and the references to the old series throughout we have decided its best to leave those for aficionados, who will have fun picking them up.

For those coming new to the series and character they are well placed insights into the developing style of this young detective, we all cannot help but admire as he goes on his journey from innocence to experience.

Simply put, Sean Evans is quite superb as the young Morse, his skills complimenting but never imitating John Thaw’s performances. With a second series now announced, there is a great many more to look forward to.

It would be entirely remiss of me not to add, that the music throughout the series is beautifully conceived and arranged.

Endeavour is a series to be both savoured and celebrated.