On a recent visit to Sydney I was pleased to take in the opening night performance of the Australian Theatre for Young People (ATYP), which is heavily sponsored by the Australian Government and Australia Council for the Arts.

The play performed is on all university curriculum’s. It was a deliciously dark confronting comedy about a group of scared young people seeking inner peace before they die, without having yet lived.

The team who produced it, under the direction of Fraser Corfield, are a small, but extremely talented group of creatives. Their mission, and that of the company, which is a not for profit organisation, is driven by the idea that the arts can inspire creative, courageous and confident young people wherever they are to be whatever they want to be.

The home of the ATYP is The Wharf Pier in Walsh Bay. The atmosphere of this highly charged play, was in this instance, certainly aided by its surroundings. I am not sure how this particular play is staged when it is performed in other states but in NSW the actors played to an audience whose seating was integrated into the set. Technically its not a theatre in the round, but the effect is the same. You are part of what is going on. 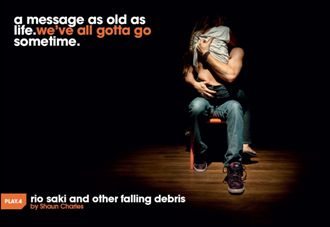 With a play like rio saki and other falling debris that was a distinct advantage.

This iconic Australian grunge play explores the emotions and reactions of six young adults as they count down to the end of the world which is about to be hit from outer space by a rock the size of Greenland.

Sitting amongst the actors, a few of whom particularly lit up the stage, the one and a half hours without an interval, sped by we were so actively involved in all that was happening. A great credit to all involved.

Faced with impending death and knowing the exact day and time of its arrival you could not help wondering how you would yourself react. It was also interesting to observe other people’s reactions to particularly lewd language and nudity, even though they probably knew about it before they came.

Shaun Charles the playwright penned this work when he himself was 22 and its debut was at the turn of the millennium. It won the George Landen Dann Award in 1997, and the Mitch Mathews Award in Sydney in 2006, from a field of more than 70 plays.

It’s full of nerdy moments, as well as exploring the drama queen inside us all. It is very well written and a perfect vehicle for young actors seeking to gain confidence and shed their inhibitions while sorting out if they are made of the stoic stuff they need to be if they are to endure in the world of acting and theatre today.

The cast were all well chosen. Lucy Coleman as Hannie and Qld Uni of Technology graduate Elizabeth Gibney as Cathy were convincing while Tom was played with intensity and depth by Kyle Hendrick.  Charlotte played by Kate Little had little dialogue, but communicated much by her actions and emotional responses. Anthony Slater as Craig was very enigmatic. For me, Dashiell Hannoush as Louis was the standout performance.

So they all asked the question….what if ….what would you do if you found out the end of the world was near. Well, we have all gotta go sometime.

The Australian Theatre for Young People (ATYP) performance of rio saki and other falling debris was both a confronting and challenging production favourably received by its opening night audience.

English painter Thomas Gainsborough (1727–1788) endowed history with lyric faces, knowing precisely the style of elegance his sitters required. His technique was vivid, spontaneous and his use of colour passionate. He always talked of colour in musical terms; harmonies, rhythms and so forth. His beautiful likeness of the Hon Mrs…