Iraqi-born internationally acclaimed British architect, the so called ‘Queen of the Curve’ and guiding light in real estate royalty, Dame Zaha Hadid (1950-2016) DBE was a woman of influence. Born in Baghdad in 1950, she recently passed unexpectedly in Miami Florida in the United States, having transcended all classifications in terms of her exceptional design achievements during her lifetime.

She strode the world of art and design with grace, beauty and strength.

In order to succeed Zaha Hadid had to become used to crossing and exceeding boundaries whether personal or professional, as she gradually built her reputation as a successful designer in our contemporary world, highlighting the world of architecture.

Like painting and sculpture, architecture is a visual art form with buildings a construct meant to give pleasure to the onlooker as a product of human innovation, initiative and above all, imagination

Hers was a career sphere mainly inhabited by men, especially when she started out. Not daunted she both equaled and surpassed them in so many ways, earning over a length of time many of her colleagues admiration and respect. A friend who visited sent a message saying it’s a “…big call I know, but the Guangzhou Opera House by Zaha Hadid … may be just a bit more amazing than the Sydney Opera House!”

Photographs of it outside and inside tell an exciting tale.

Like many of Zaha Hadid’s projects, it will long resonate and reflect her importance and ongoing role in the evolution of contemporary architecture and the art of enclosing space.

She won accolades and admirers for decades and will be sorely missed. She was a role model for a whole generation of women architects who came after her, as well as inspiration for all those students of the Architectural Association School of Architecture in London where she shared her knowledge and experience. The Heydar Aliyev Cultural Center building she designed in Baku, Azerbaijan, confounds context, rising from the landscape with fluid flowing elegance to host exhibitions, concerts and other cultural activities within its incredible event spaces.

They welcome, embrace and direct visitors and it’s no surprise it took out the Design of the Year from London’s Design Museum in 2014.

Zaha Hadi of Zaha Hadid Architects was awarded the UK’s highest honour for architects in her own right in 2015 and received the Royal Institute of British Architects (RIBA) 2016 Royal Gold Medal in February this year. Her world encompassed 360 degrees – ‘why stick to one’ she said. Design for Project in Collins Street, Melbourne, Zaha Hadid with Plus Architecture of Melbourne

Zaha Hadid was the first woman to win the much sought after Pritzker Prize for architectural achievement founded by Cindy and Jay Pritzker of Chicago, U.S.A in 1978.

They believed such a prize ‘would encourage and stimulate not only a greater public awareness of buildings, but also would inspire greater creativity within the architectural profession.’

Hadid did not win her reputation for combining innovation and imagination easily, having fought discrimination her whole life she was forced to call on her determination at all times.

Due to the time factor involved in imagining and delivering great architectural works, many of her projects will only join her legacy as they come online posthumously including three in Australia, two in Queensland causing controversy and one in the final approval stage for Collins Street, Melbourne

Zaha Hadid had never built a building in Australia and perhaps the only one that may still happen, has been planned as an extremely energy efficient project in conjunction with Plus Architecture of MelbourneL and the Australian developer creating ‘places or people’, Landream.

Australians are renowned for not being eager to embrace change, with a well-entrenched culture of conservative planning regulations so it will be interesting to see what happens next. I for one hope it goes through, Australians need to come to terms with the fact cities have to become high density in the future if the human race is to survive and be sustainable.

Zaha Hadid often had to put up with those shameful journalists who concentrated by talking negatively about her looks, the clothes she was wearing, ability to speak English and more, an attitude they would never submit a male Pritzker award winning architect to. Zaha Hadid however was not a woman who would be just dismissed. She also won the Royal Institute of British Architect’s Royal Gold Medal, the Praemium Imperial, an international art prize awarded since 1989 by the imperial family of Japan, as well as the RIBA Stirling Price for the best British building in consecutive years.

In the beginning she evolved her skills for conceiving her design projects by exploring different media and drawing techniques to arrive at a set of tools exclusive to her own practice, which involved the head, heart, hand and eye. Like many other design geniuses of the past, Zaha Hadid did not remain in one field, exploring other visual art forms including those designed for living – lighting, furniture, fashionable attire, jewellery and vases made of silver and marble or glorious crystal for Lalique and more.

She left behind a legacy of great buildings that for some seemed perfectly formed, organic, swaying yet static, some ephemeral some solid, while yet others have become powerhouse statements about how and why the art of architecture is really about how you enclose any space, with distinction. City of Dreams Hotel in Macau design by Zaha Hadid

Her body of work embraced state of the art fabrication technologies and did not admit to compromise. She gained a cult following of supporters, who admired her ability to provide a style of architecture that attracted both clients and investment.

The perception of a great building is created when it colourfully entertains as well as engages its onlooker in considered debate as to its beauty and usefulness. The Hungersburgbah, Innsbruck,  a station for the funicular railway emerges out of the mountainside like a great cloud, forming and reforming.

She re-imagined both form and function and the way they worked in collaboration with each other, also evident in her Phaeno Science Center (2005) in Wolfsburg, Germany, which for Zaha Hadid and her company was an architectural adventure 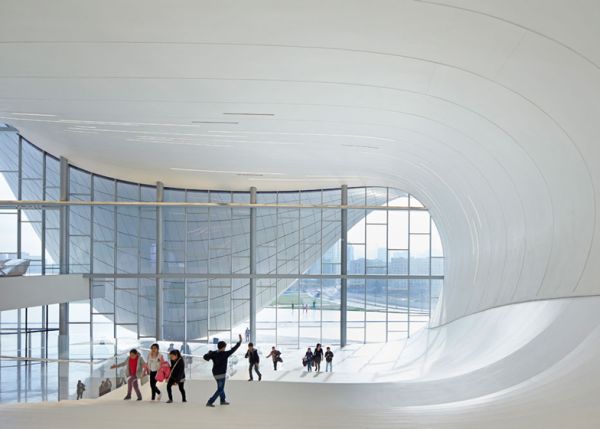 A brave and radical trailblazer Patrick Schumaker Director of Zaha Hadid Architects declared “We are all shocked and devastated that we lost Zaha today, a most beautiful individual, talent, leader and friend.”

Vale Zaha Hadid, contemporary architecture has lost a champion, one who will be sorely missed.

Organisers at the Alliance Francaise in Melbourne have found the perfect place to hold Le Fete de la Musique festival, June 21 in the Eildon Mansion at St Kilda